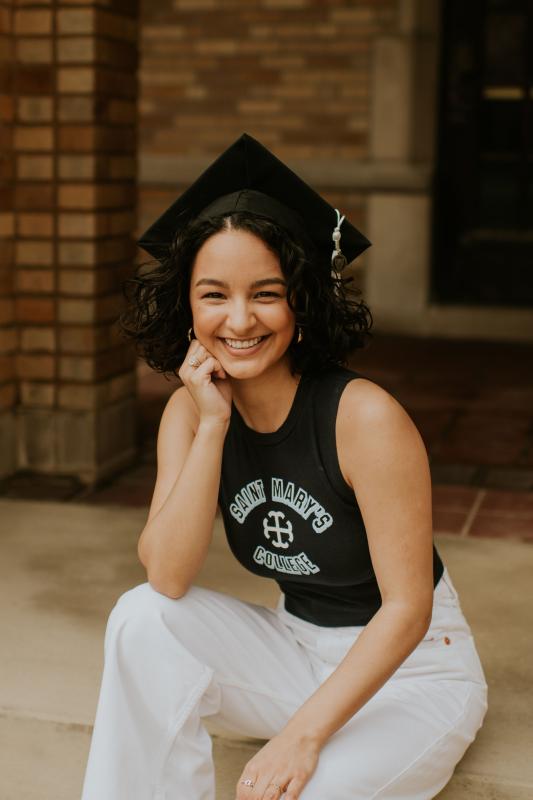 The Outstanding Senior Award is presented by the Alumnae Association Board of Directors to a member of the senior class who has demonstrated outstanding devotion to Saint Mary’s College.

The recipient of the Outstanding Senior Award exemplifies the spirit and values of her school and is distinguished by scholarship, leadership, and outstanding dedication to Saint Mary’s through participation in both curricular and extracurricular activities. As the valedictorian represents the mind, and the Lumen Christi recipient reflects the soul, the Outstanding Senior embodies the heart of Saint Mary’s.

Graduating with a double major in gender and women’s studies and sociology with a concentration in criminology and minors in intercultural studies and US history. Sophia embodies Saint Mary’s rich history through her love for all people, resilience, and persistence to be a voice for justice.

One of Sophia’s nominators, Redgina Hill, vice president for Inclusion and Equity, said this of her: “I've known Sophia for two years, and in that time, I've watched her mature as a leader, activist, and exceptional young woman. Sophia played a crucial role in developing a proposal to establish Saint Mary's College LGBTQ+ Center, which opened for our campus community this fall. This was a huge accomplishment for a Catholic institution to dedicate space and funding to establish the Center.”

As a queer, first-generation college student, Sophia comes from a large Mexican-American family in southern Texas. After attending an underfunded public high school, Sophia moved more than 1,300 miles to South Bend and Saint Mary’s, where she found her sense of belonging by working in the Division for Inclusion and Equity. Here, she saw firsthand how the office helps underrepresented students like herself.

Using her passion for inclusivity and helping others, Sophia played a crucial role in the monumental opening of the LGBTQ+ center on campus. She worked diligently with campus administrators to actualize this safe space for alumnae, students, faculty, staff, and allies. She continues to show this passion as the student office assistant for the Center and as an advisory board member.

Other notable achievements during Sophia’s career include her bringing awareness to World AIDS Day by securing funding for a panel of the National AIDS blanket to be displayed in the heart of campus. She also curated a transgender inclusivity workshop centered around inclusivity of transgender and non-binary voices that are often lost on college campuses, and recently was awarded the Jill M. Tiefenthaler Student Research Grant for her research project, titled The Lies & Dangers; Social Control and Gender Performance in LGBTQ+ Conversion Therapy Organizations. Sophia will be continuing her education for the next two years at Loyola University Chicago to obtain a master’s degree in Gender & Women’s Studies.

The Alumnae Association Board of Directors proudly honors Sophia Sanchez as Saint Mary’s Outstanding Senior of 2022.