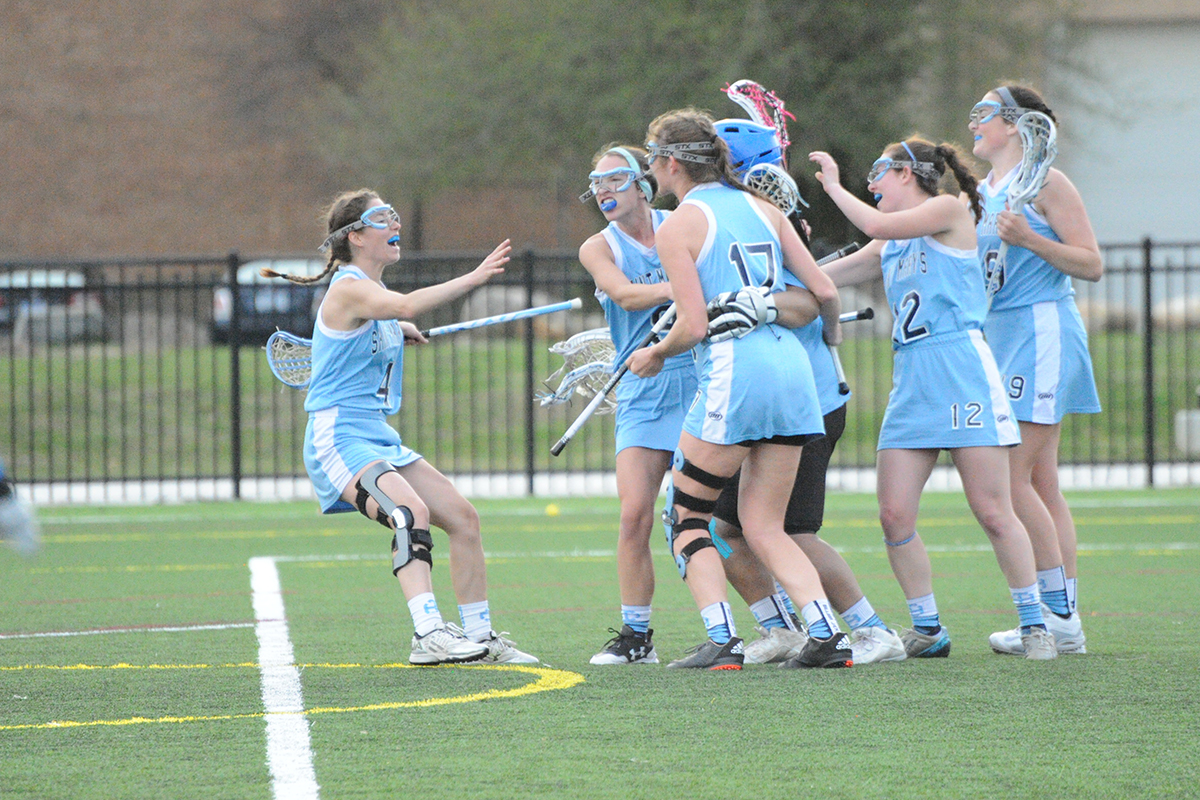 The Saint Mary’s lacrosse team continued their journey of establishing themselves as a top contender in the MIAA with another strong season in 2018.

The Belles had their best start to open a season in program history as the team rattled off four consecutive wins to kick off 2018. The year began with a home win in a wintery mix of weather against Elmhurst. A week later, the team posted a 3-0 record on their spring break trip to Portland, Oregon to remain unbeaten. During that span, the team outscored their opposition 80-25.

After falling to NCAA Tournament qualifiers Illinois Wesleyan and suffering setbacks against Carroll and Carthage, the team put together the longest winning streak in their five-year history by prevailing in their next six contests of the season. Saint Mary’s started that stretch with a commanding win over Concordia Chicago. The Belles then earned victories over Alma, Olivet, and Trine by double-digit goals to move to 8-3 on the year.

A home win over Kalamazoo a few days later set up a meetings of a pair of unbeaten MIAA teams when Saint Mary’s took on Hope at the end of that same week. After a delay and a site switch due to some tree debris on the field, the Belles prevailed against the Flying Dutch in a 10-9 overtime nailbiter. The win also gave the team their tenth win of the year, marking the second consecutive season the lacrosse team has tallied double-digit wins. A week later, it was another matchup of undefeated conference foes as the Belles hosted Calvin. Saint Mary’s fought back from three-goal deficits multiple times against the Knights, and a pair of late goals turned a 15-13 deficit with under three minutes remaining in regulation into a 15-15 tie as the two sides needed overtime to determine a winner. The Knights found the back of the net two minutes into the overtime period to claim the win as the Belles gave Calvin their closest conference game for the second consecutive season.

Saint Mary’s responded with an offensive outburst against Adrian as the Belles put up a program-record 23 goals against the Bulldogs. Two days later, the team fell in a battle for second place in league standings in a road contest at Albion. The Brits and the Belles turned around and faced on another less than a week later in the opening round of the MIAA Tournament at Albion’s Davis Athletic Complex. This time, the result was in Saint Mary’s favor as the Belles battled past the Brits in a 13-12 final to secure the program’s first postseason victory to earn a spot in the MIAA Tournament Championship. The 2018 season, however, came to an end in a championship game loss to the Knights as the Belles finished the year 12-6 overall and 6-2 in MIAA regular season play.

Several players contributed to the team’s success in 2018. Erin Doyle stormed onto the scene and blew away the program’s previous single-season goal record of 51 by burying 92 goals in her first season. That total ranked fourth among all Division III lacrosse players for the season. Doyle not only took over the top spot for goals in a season by a Belle, but she also became the first player in program history to amass 100 points in a single season after registering 21 assists. Kate Kelly complemented the offense with a strong junior campaign as she had a career-best 47 goals and a program-record 28 assists. Kelly became the third player in program history to surpass 100 career goals. Additionally, she eclipsed the 100 career caused turnovers, 200 career draw controls, and 200 career ground balls plateaus in her junior season. A year after claiming the top spot for draw controls in a single season, Kelly shattered her own record of 80 by collecting 122 draws in 2018.

Clare Theisen closed out an impressive career by posting single-season career highs of caused turnovers (42), draw controls (71), and ground balls (85) while notching the second-highest single-season totals of her career in goals (38) and points (45). Molly Stout surpassed 40 points in her junior season with a career-best 14 assists to go along with 32 goals as the Belles set new program records for every major statistical category for the year.

Defensively, the Belles have not had a stronger season. The 2018 team surrendered fewer goals (160) than any other season while playing more games (18) than any other year of the young program’s history. Emily Kraker helped pave the way as the freshman stopped 50.7 percent of the shots on goal she faced while earning seven wins in goal. Kraker tallied 103 saves in 11 appearances in 2018. Kendra Osinski added a 47.4 save percentage while seeing time in eight games and earning five wins. Rachael Leonard had a big year as the junior had more ground balls and caused turnovers in a single season than any other defender for the Belles in the past five seasons. Leonard and senior Caleigh Gainey each surpassed 100 career ground balls.

Doyle, Kelly, Leonard, and Osinski were all selected by league coaches as All-MIAA honorees in 2018. A three-time MIAA Offensive Player of the Week, Doyle was selected as the Rookie of the Year while earning a spot on the First Team as a midfielder after leading the conference in goals during her freshman season with 43. Kelly joined Doyle on the First Team after she led the conference in draw controls in 2018. Kelly was also in the top ten among all players in the league in total points, goals, assists, ground balls, and caused turnovers. A two-time MIAA Defensive Player of the Week, Leonard was one of just three defenders to be named First Team All-MIAA in 2018 after being tied for second in total ground balls and being tied for fifth in caused turnovers during the conference season. Osinski garnered the first All-MIAA accolade of her career after getting the nod for the Second Team. A native of Orange, Connecticut, she split time during the 2018 season as a goalie and attacker and was named to the Second Team for her work on attack. It is the second consecutive season Saint Mary’s has had four team members garner All-MIAA honors.

After the conclusion of the year, Erin Doyle became the lacrosse team's first Intercollegiate Women's Lacrosse Coaches Association (IWLCA) All-Region honoree as she was named to the Great Lakes Second Team. She was the lone freshman on either of the two Great Lakes All-Region teams this spring as she ranked among the top 20 in all of Division III in goals, goals per game, total points, points per game, shots on goal per game, and shots per game.