Greetings from the President’s Office in Le Mans Hall! I arrived at Saint Mary’s just over a week ago and found the campus in its late-Spring glory, but strangely devoid of people! The sun had just set when I arrived at Riedinger House, where I’ll be staying until my husband and our two cats join me later in the summer. The church bells were the only interruption of a deep and abiding silence.

I rose early the next day, laced up my running shoes, and set out to explore the campus. It was a perfect, cloudless Sunday. I ran every inch of this beautiful campus, setting my pace near the athletic fields, breaking stride occasionally to note the names of buildings I have since toured inside and out, slowing to a walk to cross the bridge at Lake Marian, pausing to open the “Book of Remembrance” outside the Church of Our Lady of Loretto, and finally stopping to wander slowly in the Sisters’ cemetery. What a remarkably peaceful place, filled with evidence of the contributions the Sisters of the Holy Cross have made to the nation, the region, and the College. I lingered, noting the service of so many nurses, especially in wartime. And I made my way to the grave of beloved Sister Madeleva Wolff, whose words I have been reading and absorbing for some time. I ran my fingers across the letters on her flat stone marker and asked for her help as I take on the responsibility of being your President.

That quiet Sunday on campus did not predict the “Le Mans start” I would have just a day later! For those of you who are not race car aficionados (believe me, I’m not one either), the 24 Hours of Le Mans is a prestigious sports car endurance race held each June in Le Mans, France — which just happens to be the birthplace of the Congregation of Holy Cross. If you watched last year’s Oscar-nominated feature film Ford v. Ferrari, you may remember that when the flag drops to start the race, the drivers have to sprint across the track and leap into their cars. The race gets underway with an exciting burst of engine noise, grinding gears, screeching tires, and billowing exhaust. This is what is known as a “Le Mans start,” and the exhilaration of that moment was exactly what I felt on Monday morning: when the flag dropped on my first week at Saint Mary’s, I hit the floor running, leapt behind the metaphorical steering wheel, and started to drive feverishly — without a seat belt. The point was to keep going — going as fast as I could — without putting the race car, myself, or other drivers at risk!

All week that “Le Mans start” seemed like an apt metaphor for my early days as President. I needed to learn so much about Saint Mary’s — and to learn it quickly: campus buildings and their capacity, campus leadership and its depths, existing college priorities and their durability, and all this learning complicated by the uncharted context of COVID-19. I met with our gracious and helpful outgoing President, Nancy Nekvasil, and then — albeit remotely — with new collaborators, with Trustees, and with alumnae from the “0” and “5” years at virtual reunion. I had a special visit with the Class of 1970 as they celebrated their Golden Jubilee. But a terrible contrast was also emerging: against the backdrop of tranquility and stability on our campus, horror, anguish, and anger erupted in cities and towns across the U.S. as Americans watched the video recording of the murder of George Floyd. And the word “race” came to the forefront of our minds in a completely different and much larger sense than the metaphorical. With increasing volume and urgency, concerned alumnae told us what that word meant to them and where Saint Mary’s has fallen short of being the welcoming community they hoped for. I knew we needed to be responsive.

Late in the week, when the Trustees and I learned of a heartfelt alumnae petition concerning racial justice at Saint Mary’s, I listened to my own heart, and I also heard the whisper of Sister Madeleva. In her memoir, My First Seventy Years, she celebrates being on the right side of history. Asked, in 1941, if she would accept Black students at Saint Mary’s, she “knew only one answer, the right one.” She stood up to critics, and Saint Mary’s changed forever. Sister Madeleva’s stance was bold: even “if it emptied the school” she said, Saint Mary’s would welcome Black students in residence.

We are at another historic moment now, though the issues are less about access and more about inclusive community. They are about justice and equity. And we need a similarly bold stance. I believe passionately that the only way the world will get better is for people to develop real relationships with people who have different ideas and experiences than they do. Who look different than they do. Who speak different languages and practice different customs. A college campus like ours is set up to make that happen, but we need to invite and support those differences in more robust ways. I know we can do better. And now is the time. Indeed, it is past time.

When I finished my work at Simmons University last month, I lamented packing up my office in solitude, on an urban campus that was also empty and quiet. But as I walked to my car with the last box of books, I took note of the labyrinth constructed on the empty quad. I dropped off the box and returned to walk that labyrinth one last time. And when I came to the end, I paused, and then, consciously, stepped out of the whorl. I thought of what the marvelous writer Rebecca Solnit has said: “A labyrinth is an ancient device that compresses a journey into a small space, winds up a path like thread on a spool. It contains beginning, confusion, perseverance, arrival, and return. There at last the metaphysical journey of your life and your actual movements are one and the same. You may wander, may learn that in order to get to your destination you must turn away from it, become lost, spin about, and then only after the way has become overwhelming and absorbing, arrive, having gone the great journey without having gone far on the ground.”

Oddly enough, that sounds a lot like the iconic 24 Hours at Le Mans endurance test.  Incidentally, for most of that race’s long history women drivers were not allowed to participate in Le Mans. But the legendary Denise McCluggage, a pioneer among women race car drivers, tells tales of her own experience of “Le Mans starts” on other tracks. She describes the adrenaline rush of that flag-drop sprint — of how one time she witnessed a driver leap right over his car in excitement, of how another time she saw two confused drivers jump into the same car, of how yet another time she saw a driver end up with her foot lodged in the steering wheel.

I had a good first week at Saint Mary’s — at least I did better than the driver McCluggage remembers whose perfectly-measured leap into his car ended with the gear lever stuck up his pant leg! But with my Le Mans start behind me, I recognize that there is a long road ahead with lots of twists and turns. On Sunday, I brought my first week full circle by walking the campus and ending at the Sisters of the Holy Cross labyrinth. Entering it, I slowed my pace and found my balance through contemplation and reflection. And I took heart from another observation made by Rebecca Solnit: “The end of the journey through the labyrinth is not at the center, as is commonly supposed, but back at the threshold again: the beginning is also the real end.”

College life involves a lot of beginnings and endings. We have opportunities for fresh starts each semester, and each year is punctuated by traditions and transitions. We have to decide, whatever our roles, when to speed up and when to slow down. And when we come to the end of the annual journey and celebrate the final “graduation” of seniors, we call it “Commencement” — which emphasizes a beginning, rather than an end. This year’s graduates know just how disorienting it is to be denied that closure after their own long endurance race.

As I commence in my own role as the College’s 14th President, I hope to create momentum around certain priorities, to achieve both speed and balance, to know when to walk and when to run. I am back in my race car this week, and I will step hard on the gas pedal with respect to our ongoing work in building an inclusive and equitable community. I will also slow down as I research and reflect on other needs we must address at Saint Mary’s in the months and years ahead. I look forward to communicating with you regularly — with timely updates from campus — and I look forward to your support as we travel this winding, looping road together. 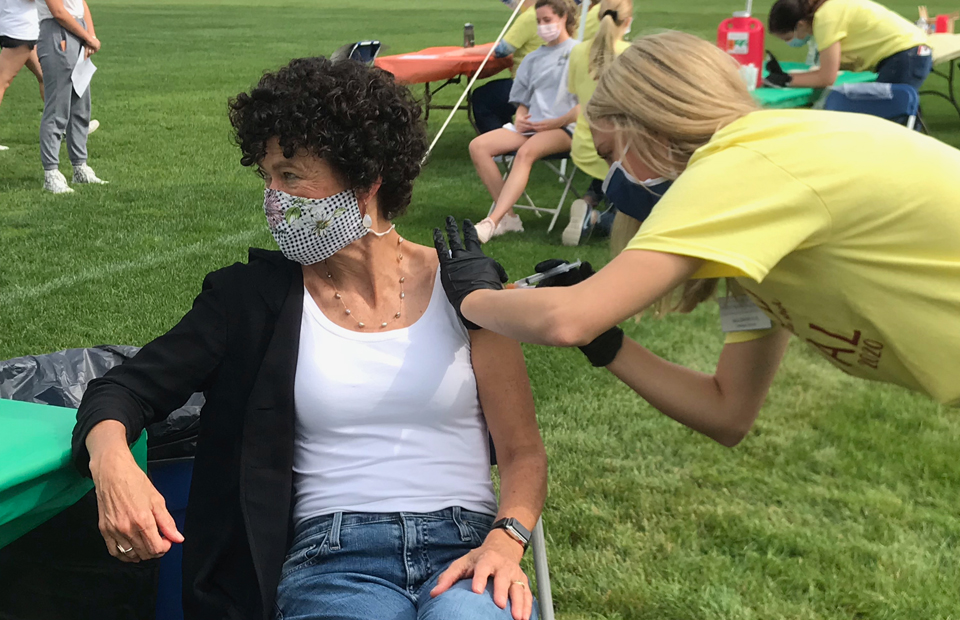 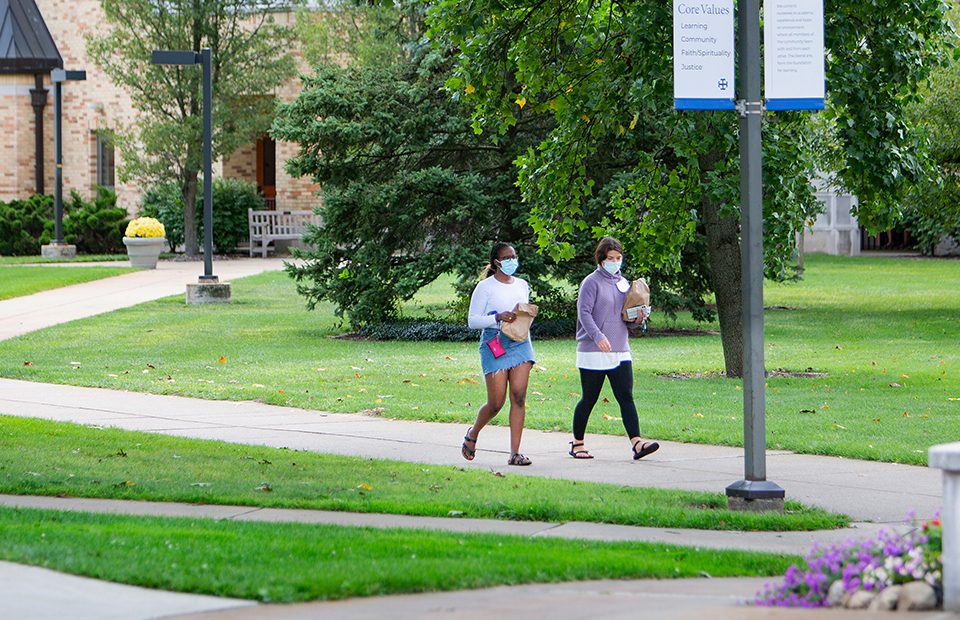 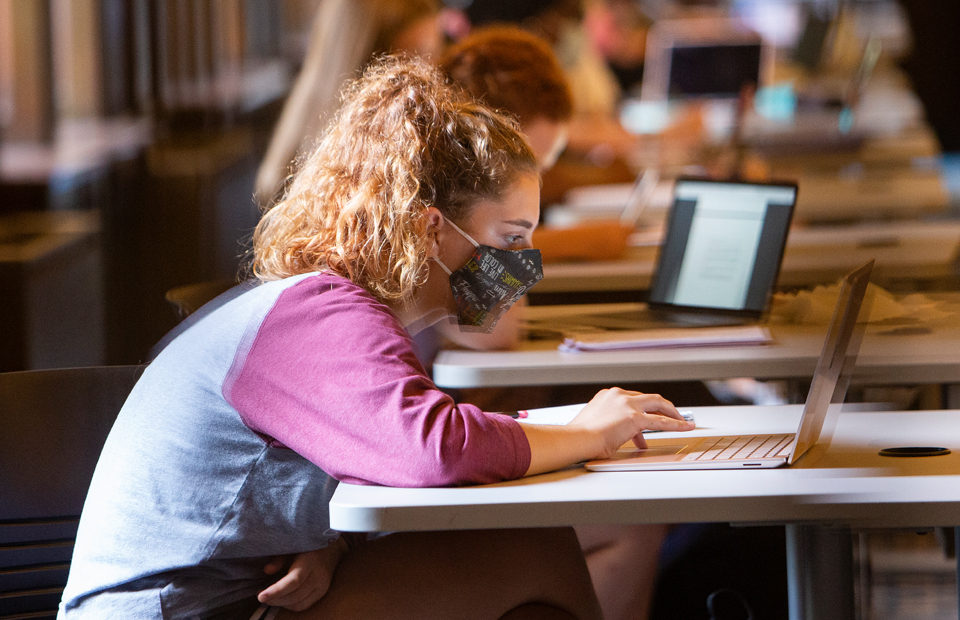