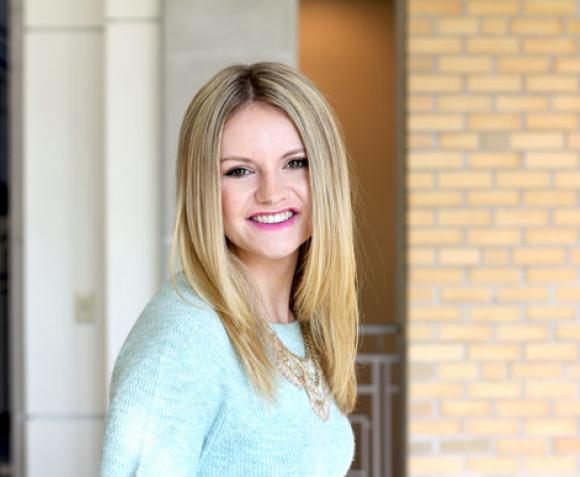 Take a look at what Belles varsity athletes did in the 2009-10 school year to help serve the College and local community! 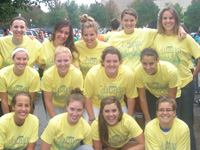 The Saint Mary's basketball team helped out for the second year in a row at the Domer Run hosted by the University of Notre Dame on September 26. The Domer Run is a 3 mile or 6 mile run as well as a 2 mile fun walk. All the proceeds from the walk/run go to help efforts in ovarian and breast cancer research.

Just as last year, team members volunteered by getting people signed in, helping get the breakfast that was to be served after the race together, and handing out water and pointing out the paths throughout the course.

In honor of Dr. Suess's birthday, the basketball team along with the College Academy of Tutoring program at Saint Mary's helped Lincoln Primary Center put on "Read Across America Night" at the beginning of March.  Members of the basketball team joined up with groups of elementary students to enjoy an evening of reading some of the works of Dr. Suess.  Hundreds of students and their families were all in attendance as the Cat in the Hat made an appearance. 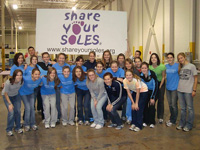 Throughout the cross country season, Saint Mary's Cross Country collected gently used shoes that were to be donated to children in Uganda. At the annual alumnae race, runners donated shoes, bought t-shirts, and ran in a 5-K that benefited Uganda. Boxes were placed in the student center, the gym, the dorms, and various other locations such as Metro Run and Walk and the University of Notre Dame's Center for Children and Families.

In October, the team counted and sorted more than 1,000 pairs of collected shoes and placed them into the respective boxes. Over fall break, the team personally took the shoes to the company Share Your Soles in Alsip, Ill. We spent the day sorting the shoes into different categories and learning about how the shoes make their way to Uganda. On top of collecting shoes, each girl collected money to be sent to the Sisters of the Holy Cross to help with the school and the hospital in Uganda. It was a great experience and a blast.

A week before Halloween, the Cross Country team took a Sunday and a Monday to decorate the Center for Children and Families and to help with the annual Halloween party. The team decorated the hallways and the center with Halloween decorations and helped set up the different stations for the party. We dressed up as different characters and helped the workers at the center with face painting  and other various games. It was a ton of fun and everyone had a good time helping out the kids and the workers.

Center for the Homeless 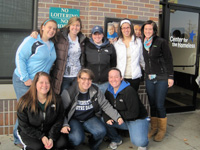 The Saint Mary’s golf team had the pleasure of helping out at the South Bend Homeless Shelter with a Christmas brunch to get into the holiday spirit. To make the occasion more special for the families there, children were paid a visit by the big man himself, Santa Clause. This was a great experience to be able to talk with the families, help out in the kitchen and also aid in organizing the shelter. It was just what was needed to be put into the giving mood for the season. It was great to give back to the community and to volunteer to a worthy cause.

The golf team joined with a crowd of over 500 people to walk the streets of South Bend in February to raise awarness and funds for St. Margaret's House.  The walk raised more than $43,000 for the organization, which helps needy women and children.  An average of 70 to 75 women and children use the program each day.  The Winter Walk is the group's largest fundraiser each year.

The Saint Mary’s soccer team decided to spread a little Christmas cheer this semester with our troops who are abroad.  The team took time throughout the last two weeks of the fall semester to write and illustrate Christmas cards as a way of thanking America’s men and women in the armed forces. We hoped to wish them a very Merry Christmas, in which they would not be able to spend with their families, from the team and the community. We wanted to brighten their holiday season and let them know that so many of us back at home, wherever our homes may be, are thinking of them and appreciating the sacrifices they make, especially as we spend our time with so many family and friends during the holiday season.

Yes, We Can! Walk

On Sunday March 28 the Saint Mary's College soccer team participated in the Yes We Can! Walk for Hunger. Raising cans and donations for the Little Flower Food Pantry in South Bend, the soccer team joined in on the walk to the Grotto, where we then paused for prayer and reflection on hunger, before walking back to Saint Mary's. More then 175 cans and $225.00 were raised by this event to benefit the hungry. 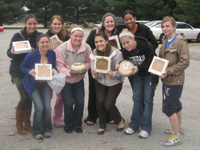 Before going home to enjoy the relaxing Thanksgiving holiday, the Saint Mary's softball team helped Hope Ministries prepare a Thanksgiving Day meal.  To do this, some of the girls purchased pies to help the Sound Bend Alumnae Club reach their goal of 80 pies to donate to the Ministry.  By "pledging" 10 pies, we were able to actively contribute in bringing families a Happy Thanksgiving holiday.

Before kicking off the 2010 playoffs, the Saint Mary's Softball team spent the second-half of May 5th's practice shopping for uniforms and school supplies to donate to Navarre Intermediate Elementary School located in South Bend, Indiana. Among several other things, the team purchased backpacks, pencils, paper, folders, and binders for the students. By doing so, the girls helped underprivileged children from the local community attain some of their basic school supplies before the upcoming school year. 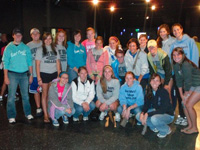 Saturday September 26th Saint Mary's swim team volunteered at Notre Dame's Domer Run. This 5k run, 10k run, or 2 mile "fun walk" was held to raise money for local cancer programs. The Belles arrived at Legends at 8am ready to help! The team divided in to groups of about five.

At each station around the course the swimmers handed out water and encouraged the runners. A perfect job for a team that loves water! Freshman swimmer Ellie Watson commented on the experience, "The Domer Run was a great way to further bond with the team and show support for those suffering with cancer." Overall the members of the swim team loved having the chance to give back to the community.

The tennis team also joined with a crowd of over 500 people to walk the streets of South Bend in February to raise awarness and funds for St. Margaret's House.  The walk raised more than $43,000 for the organization, which helps needy women and children.  An average of 70 to 75 women and children use the program each day.  The Winter Walk is the group's largest fundraiser each year.

After try-outs, the Saint Mary’s volleyball team helped first years and their parents move into the dorms across campus. Over 400 young women moved in early for first year orientation. They were happy to have the extra legs to carry bedding, clothes, and various boxes up flights of stairs. The service project helped the new SMC families have a smooth transition to the college. The Belles hope to continue this annual project.

Dig For the Cure

The Saint Mary’s volleyball team kicked off breast cancer awareness month with the annual Dig for the Cure match on October 6 against Calvin College. The Belles organized the event in order to raise awareness and funds for the Komen Foundation. They sold pink t-shirts, collected pledges, and accepted donations for festive pink desserts provided by Noble Dining Hall.

Angela Athletic Facility was decked out with pink posters and balloons in addition to the Belles wearing pink warm up shirts. Overall, the Belles collected over $1,100 for the Komen Foundation. The Belles would like to thank all who helped and donated for making the first Dig for the Cure a success.