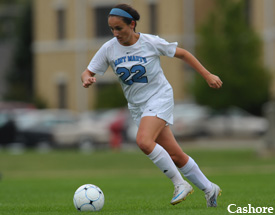 Valencia was one of just 24 players in the nine-team league to earn all-conference accolades for the year. A starter in each of the team's eight conference contests and 19 games of the season, she was tied as the team's leading scorer at the end of the year. She also led the team in shots in all competitions during the 2010 campaign.

Valencia was one of three freshmen selected to the All-MIAA Second Team while five total rookies were all-conference first or second team honorees this season. Moreover, she is one of six players from outside the state of Michigan to be honored in 2010.

She becomes the 12th player in program history to be an All-MIAA selection.  It is the tenth consecutive year that a Saint Mary's soccer player has been named to either the All-MIAA First or Second Team.