Belles Fall in Opener to Aurora

NOTRE DAME, Ind. - The Saint Mary's soccer team fell by a 4-0 margin to visiting Aurora in both teams' season opener on Wednesday evening. 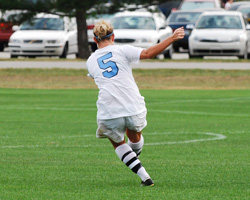 The Spartans, who made an appearance in the 2009 NCAA Division III Tournament, got on the scoreboard in the 12th minute on a ball played over the top to Jordan Joyce, whose well-placed shot just under the crossbar put Aurora up 1-0. Joyce would also add another goal in the second half of the game as the Spartans scored twice in the first 45 minutes and twice in the second half.

The Belles had a handful of opportunities throughout the contest. Senior Corissa Hart and freshman Jordan Diffenderfer each had a pair of shots for Saint Mary's. Hart fired a shot from 23 yards out that ricocheted off the cross bar while Diffenderfer had a strong, low shot that was corralled by the Aurora goalkeeper.

Kristen Nelson had six saves in goal in her first appearance on the pitch for the Belles while suffering the loss.

The Belles (0-1) will travel to the University of Wisconsin-Oshkosh for a weekend tournament on Saturday and Sunday as they take on Carthage and the host Titans.