SOUTH BEND, Ind. - The Saint Mary's soccer team ended on the short end of a 2-0 final against Kalamazoo in conference action on Monday evening. 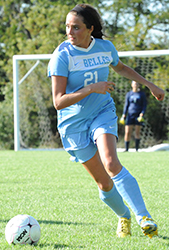 Rachel Moore looks to play
the ball upfield. The Belles opened up the game with three solid scoring chances in the first six minutes of play. Kay Thursby was on the receiving end of a corner kick in the second minute, but her header sailed high and right of the goal. Two minutes later, Jenn Jarmy played the ball up along the right flank to Liza Felix. Felix fired a shot from along the right end line, but a diving stop by the Kalamazoo goalkeeper kept the Belles off the scoreboard. In the sixth minute, Saint Mary's nearly capitalized on a muffed clearance attempt by the Hornets, but another stop by the Kalamazoo netminder halted Maggie McLauglin's shot from finding the back of the goal.

The Hornets, however, were able to strike twice in quick succession. Madeleine Chilcote had a tap-in goal inside the six-yard box in the 23rd minute while Madison Moote's shot from the edge of the 18-yard box sailed into the goal in the 31st minute for the 2-0 Kalamazoo lead.

Kalamazoo put the pressure on the Saint Mary's defense in the early minutes of the second period, but the backline held strong while denying the Hornets from doing any more damage. With more than 30 minutes remaining in the game, the Belles shifted the momentum and put the pressure on Kalamazoo's defensive corps. Jarmy found Felix for a second time on the right side of the field, but this time Felix's sliding shot went past the keeper and just outside the far left post in the 56th minute.

A few moments later, McLaughlin lofted a pass ahead to Baylee Adams high in the Saint Mary's offensive end of the field. Adams got off a strong shot, but it was met by the diving Kalamazoo goalkeeper for a save. In the 60th minute, Kate Vasile had a similar fate as Adams as the pass she received from McLaughlin resulted in a shot being saved at nearly point-blank range by the Hornets.

In the closing minutes, the Belles continued to press for a goal and give life to their comeback efforts. With less than two minutes remaining, Brianna Hart struck a long-distance shot on goal and had her effort blocked by the goalkeeper. The save, however, was not controlled as the ball fell into open space inside the penalty area. Jenn Jarmy rushed up for the rebound shot attempt, but her strike went just to the right of the post.

The Belles (0-5, 0-3 MIAA) have another short rest before hosting in-state MIAA rival Trine on Thursday, September 17 starting at 4:00 p.m.