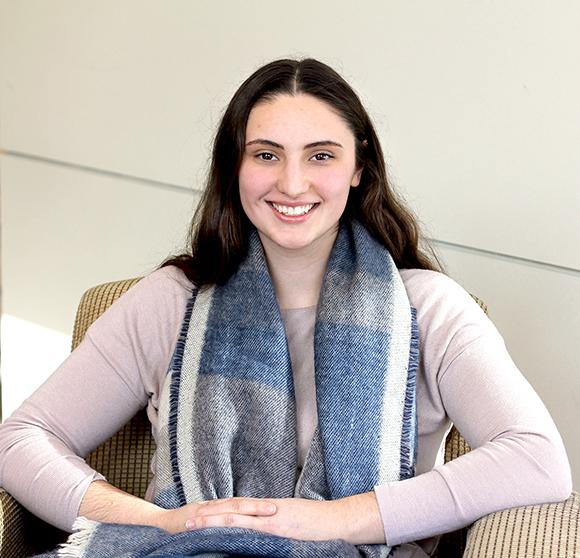 "Philosophy has taught me that everything warrants challenging."

A South Bend native, Gabi Weldy ’18 wanted to attend Saint Mary’s since she was in the seventh grade. “It struck me as being a place where I would grow interpersonally as well as intellectually,” she said.

Gabi treasures the culture of kindness prevalent at Saint Mary’s in her fellow and dedicated professors who have nourished her growth. Reflecting on her almost four years at Saint Mary’s, she shared, “I’ve felt very grateful that I’ve encountered so many instructors whose top priority is my personal and intellectual betterment.”

Gabi’s deep intellectual curiosity led her to declare two majors and two minors, exploring avenues she never would have considered before her time at Saint Mary’s.

After taking an introductory philosophy course to complete a Sophia program requirement, Gabi found herself so invigorated with the subject she decided to add the major, a decision she is continually grateful for and fulfilled by. Not only has that decision strengthened her professional and intellectual abilities by equipping her with strong problem-solving, critical thinking, and argumentation skills, but it has also expanded her personal and world views. She said, “Philosophy has taught me that everything warrants challenging, and better positions will likely make themselves known through that challenging.”

Putting her skills to use

Gabi also excelled in her communication studies major, which allowed her to explore her interests in narrative and storytelling in combination with her minors in film and theater production. During the summer after her sophomore year, she put these skills to use as an intern for WNIT Public Television and the South Bend Civic Theatre.

Gabi will graduate in May confident in her professional and intellectual abilities. Accepted to the prestigious Orr Fellowship, a funded two-year program for recent graduates, she will be working for TMAP, a tech startup in Indianapolis. The wide range of abilities she acquired at Saint Mary’s impressed the startup, many of which look for agile thinking and versatility in prospective hires.

Written by Veronika Hanks '18, media relations intern and a global studies and philosophy double major with minors in gender and women's studies and Russian.