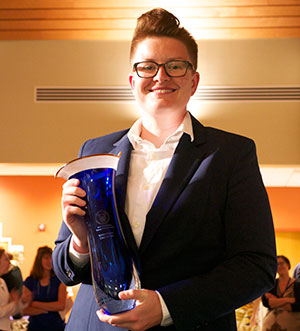 June 3, 2013 (Notre Dame, Ind.)—The Outstanding Young Alumna Award honors an alumna of Saint Mary’s College who exhibits leadership not only in her personal and professional accomplishments, but also in her involvement with the Alumnae Association or the College directly. A candidate for this award would have graduated from this Catholic liberal arts women’s college within the last 15 years.

The 2013 recipient is Kristen Matha ’03 of Indianapolis. She received the Outstanding Young Alumna Award at the Reunion Banquet Saturday, June 1 as part of Reunion Weekend, May 30-June 2. She is recognized as an exemplary leader in her professional life and in her relationship with the College.

As a Saint Mary’s student, Matha was a four-year letter winner in basketball, a student-athlete representative to the Michigan Intercollegiate Athletic Association and served as student trustee. She parlayed her athleticism and leadership skills into a career, joining the National Collegiate Athletic Association in 2006 as a member of the NCAA post-graduate internship program. Currently, Matha leads the department’s information management group, which is focused on improving the department’s efficiency and effectiveness in desktop investigation, technology, and knowledge management. During her time with enforcement, she has investigated and processed major violations of NCAA legislation, primarily in the sport of Division I men’s basketball. Additionally, she has been engaged in several national office initiatives, including the Inclusion Forum Planning Team, Information Security Project Team, and Learning Management System Project Team.

Matha is a devoted Saint Mary’s alumna. She stays involved with College athletics and never misses an alumna basketball game. She acts as an NCAA resource to the athletic department, answering questions regarding legislation. She regularly participates in political science networking events on campus, serving on discussion panels and attending department lunches. In addition, she is part of the Alumnae Resource Network, as well as co-chair of her class Reunion Gift Campaign for 2013.

Matha also lends her knowledge and experience to the task of mentoring current students. “Kristen is one of those successful young professionals that we want our current students to meet and interact with. She has a passion for what she does and an appreciation for how her time here at Saint Mary’s prepared her for her career,” said Director of Athletics Julie Schroeder-Biek ’88 in nominating Matha.

Matha has also devoted her time and enthusiasm to helping fellow former basketball teammate Anne Blair Payne ’02. Last summer Payne was diagnosed with lymphoma and Matha and her teammates set up a giving site to help offset her treatment costs. They had bracelets made and distributed them to raise awareness for Payne’s cause; they communicated her needs to supporters through social media; and they organized events to support her fight against cancer.

According to Payne, who nominated her for this award, Matha “was an ambassador” on her road to recovery. In addition to the aforementioned, Payne said Matha “was like family to me as she sat in chemotherapy sessions and took the time to visit and bring over food to me and my family. She is a leader and a remarkable person in my eyes, who demonstrates so many of the qualities and values that Saint Mary’s stands for.”

Click for information on the other 2013 Alumnae Association Award recipients.