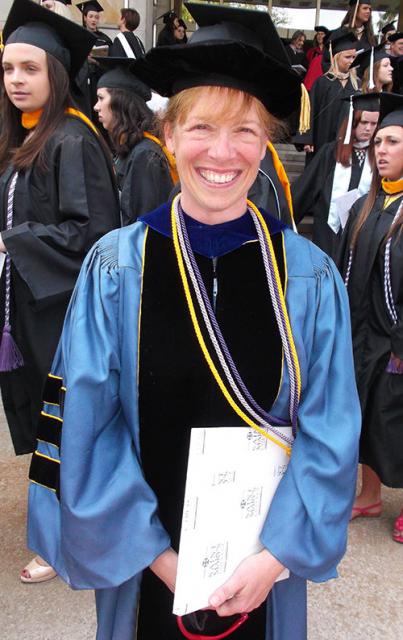 According to her award citation read by Provost and Senior Vice President for Academic Affairs Patricia Fleming, for Barstis, teaching is an all-encompassing passion that defines every aspect of her work. Her course responsibilities include some of the most intellectually challenging content in the undergraduate curriculum. And she requires no less than the best efforts of her students, whom she will push and pull and prod to meet their highest potential. Yet she does so with a humor that is infectious.

As stated in the citation, for Barstis, scholarship means research that is student-centered and student-driven. She knows that, in the best collaborative work, senior and junior partners truly learn from one another. That willingness to step into new areas outside of one’s comfort zone with a team of a dozen or more undergraduate and high school students has yielded impressive results. Students routinely present at national conferences; their work has garnered international coverage and generated patent applications; and, most satisfying, the research has advanced the goal of providing citizens of third-world countries with simple, affordable (paper analytical device or PAD) tools for avoiding tainted and counterfeit medicines. 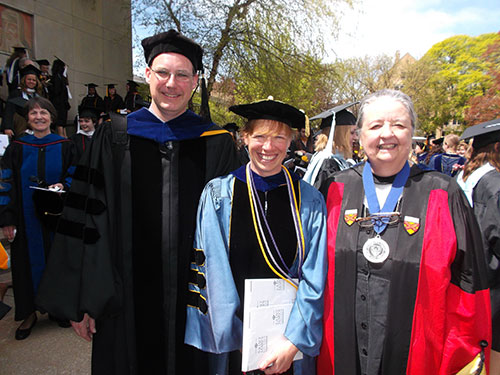 2013 Spes Unica Award recipient Toni Barsits, center, poses
with Christopher Dunlap, chair of the Department of Chemistry
and Physics, and Dorothy Feigl, chemistry professor and
Denise DeBartolo York Endowed Chair in Science.As far as service, Barstis has engaged in wide-ranging service on college committees, but her signature contribution is her revitalization of the College’s Dual Degree Program in Engineering. As noted in the award citation, Barstis has worked tirelessly with multiple departments at Saint Mary’s and the University of Notre Dame to integrate course requirements and modify program parameters to the benefit of Saint Mary’s students. And she provides the thoughtful counseling and encouragement that supports the increasing number of students who choose this demanding sequence, extending a tradition that is as old as Saint Mary’s—offering women the option of non-traditional careers.

Barstis was honored by the recognition. "I am deeply humbled to be a recipient of the Spes Unica award, and must extend my sincerest gratitude to all of you: My family. You spend nearly as much time in the lab and office as I do. My colleagues and mentors. You have trained me to teach, research, and serve with integrity. My students, especially engineering students and PAD researchers. I try to learn from your example every day, with the hopes of 'paying it forward' by 'finding or inventing a way' to 'make a difference in our world. Thank you for the privilege of working with and learning from you all," she said. (*Barstis referenced excerpts from the Saint Mary's College Engineering Motto and PAD Project and College Mission Statements in her quote.)

Click for more on Toni Barstis, professor of chemistry.