The Art of Drafting Team SMC

The Art of Drafting Team SMC 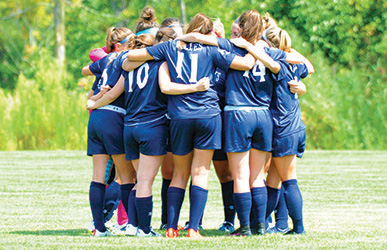 I don’t know about the rest of you, but it sure seemed to me that there was a little extra March madness in the air this year. It has been one of the busiest periods since I arrived at Saint Mary’s, and there are no signs of a slowdown anytime soon!

That said, the rollercoaster of the NCAA basketball tournament was very much on my personal radar screen since, as many of you know, I am a University of Kansas graduate! The Jayhawks generally have pretty successful post-season play, but they hadn’t won the tournament since 2008. And this particular team was so much fun to watch—right through March and into April, when they beat the North Carolina Tar Heels to become the National Champions. As I followed them, it seemed clear that the reason they were so winning—in more ways than one—was that they were a real team. Of course there were individual stars, like Ochai Agbaji who won top tournament honors and numerous other accolades, and big forward David McCormack who put them over the top in the final minute of the final game, and sixth-man Remy Martin who came off the bench and lit up the scoreboard just when they needed fresh legs and a hot hand.

Perhaps I am particularly attuned to what makes a team great because I am in the midst of building my own senior administrative team here at Saint Mary’s, and I believe there are many lessons in athletics for other kinds of teamwork and leadership. In fact, right now I’m reading a classic book on hockey by former Montreal Canadiens goalie Ken Dryden. Now almost 40 years old, Dryden’s The Game is widely considered to be one of the best books written about any sport. Early in the book, Dryden asks his coach, Scotty Bowman, what the most important aspect of his job is: “He sat quiet for a moment, his face unfurrowed and blank, thinking, then said, ‘To get the right players on the ice.’” In the period Dryden writes about—Montreal’s dynastic heyday of the 1970s—the Canadiens had tremendous talent, speed, and size, and a deep bench. Bowman could craft the right lineup for the specific challenge of each game. In Dryden’s words, the coach “sets the tone and mood for the team.”

Yes, this Spring I am working on getting the right players onto my own metaphorical ice (or parquet floor). I had some planned retirements to fill, and I needed to replace some people who left Saint Mary’s for new opportunities. But as we tackle the implementation of the strategic plan—Revere and Revise—we will need to exercise both speed and strength, and versatility too. We will want to know we have bench depth, that there are extra players in each area who are being developed and can be counted on to step up and step in when their number is called. I hope to have a team that will believe in itself, show staying power, and bring out the best in each other.

All around campus, I’m seeing signs that others are putting together teams as well—starting with our own student athletes! After COVID-19 impacted athletics across every season from spring 2020 through winter 2021, I am excited to see coaches and students working together to rekindle the competitive flame. It is a time of recharging and rebuilding, of accepting the losses that came with the pandemic and rediscovering the joys of training and competing. Also, Student Government Association elections have recently concluded, and new leaders begin their terms as student body president and vice president on May 1, 2022. In the meantime, the “Big Boards” and Class leadership rosters are also emerging, and they will surely find their own group rhythms. My calendar holds space for a meeting this week with the Observer Board, and the editorial and news teams are already gearing up for next year.

April also brought several major events that required the effective and efficient group dynamics that we might call teamwork: the spring play She Kills Monsters! came first; then the Dance Marathon (which raised a record $210,000 for Riley Children’s Hospital); then our first Raise Your Voice sexual violence awareness symposium; and (up next) the spring Choral Concert. In short, there are many ways for students (and all of us!) to learn what can happen when we band together with others in a common cause. Often, when we join a team, we have no idea what our effect on the team will be—or how the dynamics will work on us. It can feel as speculative as a draft pick, but also as promising and exciting.

Reading this makes me think about the impact of my own hiring decisions: every appointment I make will matter to each of the people already on the executive team and the cabinet. And of course, these appointments will matter to everyone at the College, because at a place so small, we are all touched by each other in direct or indirect ways. We are all part of "Team SMC." Using the same considerations, faculty and staff are busy hiring new department members. In the same spirit, I hope that students also absorb these lessons. As our seniors ride the momentum of this last month at Saint Mary’s, I hope they will be intentional about the gifts and strengths they will carry forward into workplaces, community organizations, and graduate programs. They can be the kinds of contributors who help make others—and therefore a whole team—even better.

In the midst of this Holy Week, I wish each of you all the blessings of Easter.