Belles Tripped Up by Scots, 1-0

Belles Tripped Up by Scots, 1-0

NOTRE DAME, Ind. - The Saint Mary's soccer team held their own in a physical match up against the defending MIAA champions, but the visiting Alma Scots would be the ones to leave with the 1-0 decision on Thursday afternoon. 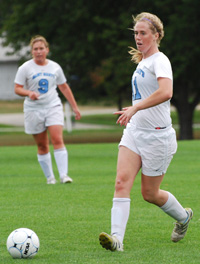 Mary Kate Hussey clears the ball against
Alma on Thursday as Anna Stollhans
looks on.Alma would come out and possess the ball for much of the first half. In the twelfth minute of play, it appeared as though the Scots were going to break through for the game's first goal. After an Alma corner kick led to some scrambling by both sides inside the box, the ball came to Elaine Cunningham's feet just inside the six-yard box. However, she had her shot turned away at the goal line by freshman defender Mary Kate Hussey as the Belles continued to hold their line.

At the end of the first half, the Belles had turned away all five shots on goal by the Scots as the teams were tied 0-0 at the break.

In the opening minutes of the second half, the Belles made a push to be the first team on the scoreboard. Kerry Puckett had her shot turned away, but the Belles would earn a corner kick soon after the shot on goal. Kaitlin Teichman played the ball into the crowd inside the box, but the Scots cleared the ball away. Less than a minute later, Mollie Valencia found herself in a one-on-one situation deep in the Scots' end of the field. Despite having a difficult angle to try to put the ball on frame, the sophomore lofted a shot from a few steps inside the field of play from the end line and over Alma's goalkeeper. Valencia's shot appeared to be heading across the goal line, but unfortunately for the Belles, the ball deflected off the bottom of the cross bar and away from the goal. 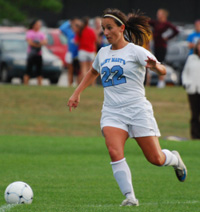 Mollie Valencia looks to push the
ball forward against Alma.Just over two minutes later, the Scots would be the ones with the ball deep in the Saint Mary's end of the field. After a ball was played into the box, members of the Saint Mary's defense got tangled up with an Alma player. The ball, which was being played away by the Belles, became loose and fell at the open feet of Alma's McKenzie Smith. The freshman forward for the Scots had an open net in front of her and scored what proved to be the lone goal of the game in the 54th minute of play.

Chanler Rosenbaum made six saves on the afternoon in the loss. Keely Noonan and Mollie Valencia each registered multiple shots for the Belles on the day as well.

Saint Mary's (5-2, 1-2 MIAA) will look to bounce back on Saturday when they travel to Albion for a conference contest against the Britons beginning at noon.