The Knights got on the scoreboard early as they tallied goals in the 11th and 16th minutes of play to set the tone.

Abby Garcia had back-to-back looks at the goal, but the freshman's first shot hit the post and her second shot went wide in the first half. Katelyn Tondo-Steele also struck the ball on goal in the first half, but she had her shot turned away by the Calvin goalkeeper. 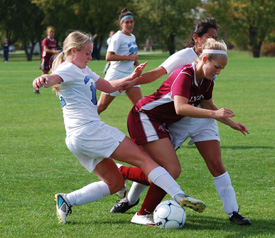 Kari McClowry and Abby Garcia battle with a Calvin
player for possession of the ball.The Knights continued to pressure the Belles in the second half as they tallied a goal less than six minutes into the half. Calvin went on to add goals in the 76th and 83rd minutes of play.

One of the Belles' best looks to get on the scoreboard came when Katelyn Tondo-Steele had a shot in the box saved in the 56th minute. The save was not wrapped up by the goalkeeper and the ball remained live just outside of the six-yard box. The Belles, however, were unable to get a clean shot off at goal with the Knights' goalkeeper off of her line. In the closing minutes, Tondo-Steele laced a pace through the defense to Kerry Puckett as the sophomore was making a run up the right side of the field. Puckett's mid-range shot, however, was also turned away by the Calvin goalkeeper.

Chanler Rosenbaum suffered the loss in goal for the Belles as she made a pair of saves while surrendering two goals. Nicole Papiernik played nearly 44 minutes in goal and allowed just one goal while collecting two saves. Taylor Dygert played the final 22 minutes of the contest and had three saves while giving up one goal.