NOTRE DAME, Ind. - The Saint Mary's soccer team finished their 2011 season on a very high note as they shut out visiting Hope by a 3-0 margin for their tenth victory of the season on Tuesday. 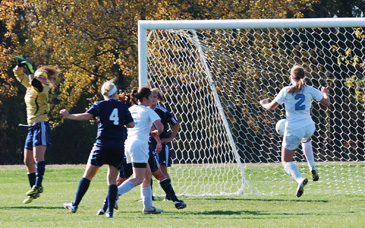 Kerry Green (2) settles the ball before scoring the eventual
game-winner in the first half on Tuesday.The Belles had a response for everything the Flying Dutch threw their way on an unseasonably warm November 1 afternoon. Saint Mary's took full advantage of their first corner kick of the contest, which came just over 10 minutes before halftime. Taylor Paton sent a cross past the out-stretched arms of the Hope goalkeeper. When the ball came down, Kerry Green had nothing but open space between her and the back of the net with the ball at her feet, and the freshman defender sent home the game's first goal and her first goal of the season. The Flying Dutch tried to respond quickly before the end of the half, but Chanler Rosenbaum turned away both shots on goal to give the Belles the 1-0 advantage at the half.

Despite Hope notching a pair of shots to open the second half, it was just a matter of time before the Belles connected on a few passes for a breakaway opportunity. Continuing to push forward, Kaitlin Teichman threaded a pass directly up the middle of the Hope defense to Jordan Diffenderfer. The sophomore, who was making a run from the left side of the field across to the right, received the ball in stride a step ahead of her defender, touched the ball to the right side of the box, and buried her shot in the 58th minute to put the momentum further in the Belles' hands.

After a flurry of substitutions by Hope and continued pressure by the Flying Dutch offense, it would again be the Belles with the answer in the form of a counter attack. With just three Hope defenders in their half of the field, Jordan Diffenderfer pushed the ball forward along the left side of the field. After cutting back to the middle ahead of her defender, Diffenderfer slotted a pass to the right side to Michelle Marshall. The senior had just the goalkeeper to beat, who was coming off her line to take away Marshall's angle. The Belles' co-captain, however, was able to beat the Hope's pursuing keeper and put the ball away to put Saint Mary's up 3-0 with just 3:18 remaining in the contest. 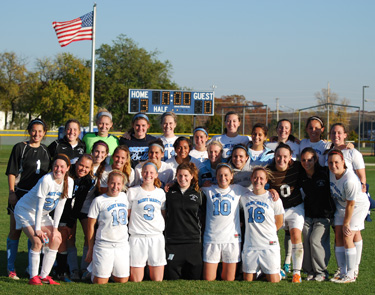 The Belles soccer team huddles up after their season-ending
win against Hope.The 3-0 win over Hope marks the first time since 2004 that the Belles have earned a victory over the Flying Dutch.

Chanler Rosenbaum notched seven saves in goal while earning the shutout victory for the Belles. With a solid performance by the defensive back line to subdue the Flying Dutch pressure, Rosenbaum picked up her second shutout win of the season as the Belles tallied their sixth clean sheet of the 2011 season.