Belles' Second Half Pressure Not Enough Against Kalamazoo

Belles' Second Half Pressure Not Enough Against Kalamazoo

NOTRE DAME, Ind. - The Saint Mary's soccer team out-shot visiting Kalamazoo 12-4 in the second half but was unable to convert any of those shots into goals as they fell 2-0 on Saturday afternoon.

The Hornets maintained possession through much of the opening half and continually applied pressure to the Belles defense from the opening whistle. Pressing forward quickly, Kalamazoo got on the board after converting a slotted pass to the left side of the box, which was sent in from near the six-yard box in the 21st minute by Jackie Short. Ten minutes later, the Hornets looked to extend their lead with a shot that appeared to be sliding just under the crossbar. Freshman goalkeeper Chanler Rosenbaum had other things in mind, however, as she made a leaping save as the ball passed above her head to keep the game at 1-0.

With less than ten minutes left on the clock before the half, a miscue inside the Saint Mary's box left the ball at an open Kalamazoo player's foot inside the box. The Hornets put the ball in virtually uncontested for the second goal of the game. 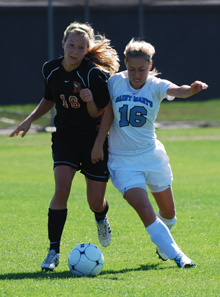 Katelyn Tondo-Steele battles for the ball
against Kalamazoo on Saturday.Saint Mary's would not go down easily in the second half. Coming out of the break, a reinvigorated Belles side came out and were the ones pressing the opposition's defense. Just a few seconds into the second half, Keely Noonan fired a shot from outside the 18-yard box. While her shot was saved, it set the tone for the rest of the Saint Mary's offense to push forward. In the 60th minute, Ashley Morfin spun her way free in the box and looked to get the Belles on the scoreboard. The junior's shot was carried just a bit too high by the breeze and bounced off the crossbar. A few minutes later, the Belles earned three consecutive corner kicks. On the third opportunity, Katelyn Tondo-Steele found the ball at her feet, but her shot too went too high and over the crossbar.

For the game, Kalamazoo out-shot Saint Mary's 17-14 while the Belles held a 12-4 advantage on shots in the second half. Kaitlin Teichman had a game-high five shots while teammate Ashley Morfin put the ball toward goal four times.

Chanler Rosenbaum corralled five saves in goal for the Belles.

Saint Mary's (6-4, 2-4 MIAA) will be on the road for their next four consecutive games. That road trip begins Tuesday when the Belles travel to in-state conference rival Trine for a 4:00 p.m. tilt with the Thunder.