Belles Hold Off Thunder for 2-1 Win

Belles Hold Off Thunder for 2-1 Win

ANGOLA, Ind. - Katelyn Tondo-Steele scored a big-five goal to begin the second half and Ashley Morfin deflected a Maddie Meckes corner kick as the Belles held off a late rally for a 2-1 win at Trine.

The Belles applied the pressure early to the Trine defense as they maintained possession through much of the opening half. Of the team's five shots in the half, three of them were on goal, but the Belles were unable to convert those opportunities. The Saint Mary's defense, meanwhile, allowed just one shot in the first half and shut down three corner kick chances by the Thunder to hold the game at 0-0 going into the half. 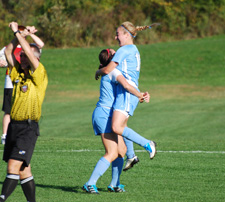 Katelyn Tondo-Steele and Maddie Meckes
celebrate the Belles' first goal on Tuesday.Saint Mary's took little time in the second half to break the stalemate. Maddie Meckes slotted a pass through to Katelyn Tondo-Steele just minutes into the second period. The senior worked her way past her last defender and fired a shot inside the far post in the 49th minute to get the Belles on the scoreboard. Less than ten minutes later, Meckes would again begin the Belles' converted scoring opportunity. The junior played a high-arcing corner kick to the near post, and classmate Ashley Morfin pushed past her defender to get a redirection of the ball just inside the near post for what proved to be the game-winner.

Trine would get on the scoreboard and put the pressure on the Belles with a shot into the top left corner of the goal in the 79th minute.

The Belles' defense, however, was able to shut down the Thunder's attempts at forcing overtime as they held their ground. Trine's best chance at tying the game - a free kick from well outside the 18-yard box - resulted in a goal kick for the Belles, allowing the final seconds to tick off the clock.

Natalie Warner saw Trine take just one shot in the first half while minding the net for Saint Mary's in the first 45 minutes. Chanler Rosenbaum then came in at the half and registered two saves for the Belles.

Saint Mary's (7-4, 3-4 MIAA) will continue their stretch of away games as they travel to Hope on Wednesday for a 7:00 p.m. kickoff against the Flying Dutch.