ROYAL OAK, Mich. - For the second consecutive season, Saint Mary's midfielder Mollie Valencia was named to the All-MIAA Second Team by the conference's soccer coaches for her efforts during the 2011 campaign. 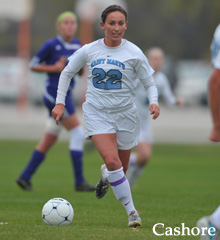 Mollie Valencia looks forward in the
Belles' home win against Albion.The sophomore was a starter in each of the Belles' 20 contests in 2011. Overall, she had three goals and a pair of assists as Saint Mary's won 10 games for the first time since 2005. Two of her three goals were game-winners. Her penalty kick against Albion turned out to be the deciding score in the Belles 2-1 victory against the Brits on October 26. Both of her assists came in conference play as she assisted the game-winning goal against Olivet on September 14 and was credited with the helper on the Belles' first goal in a 2-1 win against Albion in September.

In just her second season, Valencia becomes the sixth soccer player in program history to earn All-MIAA honors multiple times in a career. Moreover, it is the eleventh consecutive season that the Belles have had at least one player earn all-conference accolades at the end of the season.