NOTRE DAME, Ind. - Katelyn Tondo-Steele put away a perfect pass by Kelly Wilson in the with less than eight minutes to go, and Maddie Meckes added an insurance goal late to lift the Saint Mary's soccer team to a 3-1 win over Manchester College on Tuesday evening. 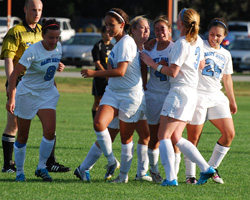 Maddie Meckes, Mollie Valencia, Katelyn
Tondo-Steele, Kelly Wilson, Taylor Paton, and
Ashley Morfin celebrate the game-winning goal.Late in the first half, the teams were in a 0-0 deadlock despite both teams having more than one decent look at goal. The Belles were in possession of the ball for much of the first half while the Spartans had their best look deflect off the crossbar and away from goal in the opening 45 minutes. That scoreless tie, however, would be broken in the 39th minute when Jordan Diffenderfer made a run from the far side of the box and put away a high-arcing pass from Kaitlin Teichman for the first goal of the game.

After the halftime break, the Belles came out looking for their second goal of the game early. On one mishandled possession, Manchester was the team that scored the next goal of the game. After retaining possession on a quick counter attack attempt, the Spartans in-bounded the ball to defender Ellyn Sallee. The freshman struck the ball high and just under the cross bar past Belles goalkeeper Chanler Rosenbaum to knot the game at 1-1 with just over 20 minutes remaining in regulation.

With continued possession and strong defense, the Belles continued to push forward to try to break the tie in their home opener of the season. The Belles' game-winner came after Kelly Wilson gained possession just inside the Saint Mary's offensive half of the field. The freshman carried the ball to just outside the box and slotted a perfect pass to an open Katelyn Tondo-Steele, who buried the game-winner with 7:50 left on the clock.

Saint Mary's was not done there as they notched an insurance goal with 3:22 remaining in the contest. Abby Garcia sent a centering pass inside the box from the right end line above the Manchester goalkeeper, where Maddie Meckes sent an uncontested shot into the back of the net for the team's third goal of the game.

The Belles out-shot Manchester 16-6 in the win with 10 of those shots going on frame. The Saint Mary's defense, meanwhile, held the Spartans to just three shots on goal for the game.

Chanler Rosenbaum picked up her third win in goal in as many games while tallying a pair of saves.

It is the first time since 2007 that the Saint Mary's soccer team has won their first three contests of the season.

The Belles (3-0) will take to the road again this weekend as they travel to Franklin for a noon contest against the Grizzlies on Sunday, September 11.