NOTRE DAME, Ind. - The Saint Mary's soccer team snapped their streak of ties with a 3-1 win over Olivet on Saturday for their first conference victory of the 2013 season.

The Belles jumped out to a quick start with a goal in the opening two minutes. Emily Rompola played a ball over the Olivet defense to Kelly Wilson. Wilson then sent a cross to the face of the goal, where Rosie Biehl headed a shot in from just inside the far post to lift the Belles to a 1-0 lead only 1:03 into the game.

Maintaining possession for long periods of time, Saint Mary's controlled much of the tempo and play throughout the first half. In the 39th minute, the Belles appeared to have taken a 2-0 advantage until a goal was waved off after a foul was called inside the box. In the closing seconds of the half, Mary Kate Hussey's effort to cushion the lead on a header sailed just above the crossbar to wrap up the first 45 minutes of play. 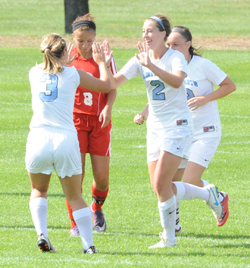 #3 Lindsay Rzepecki and #2 Kerry Green
celebrate Green's go-ahead goal.The Belles came out quickly in the second half to gain a corner kick in the first minute of the period. Kaitlin Teichman's offering from the corner found Erin Mishu, whose header hit the post and deflected out of bounds for the goal kick.

Olivet's counter following the goal kick led to the equalizer after the ball deflected out of Chanler Rosenbaum's possession directly to the Comets' Jordyn Mackool for the empty-net look.

In the 54th minute, Teichman lofted another corner kick into the six-yard box where Mary Kate Hussey's header was cleared off the line by an Olivet defender. Just a few minutes later, Mishu found the iron to be unforgiving as her chip shot bounced off the crossbar and down away from the goal line until the Comets' goalkeeper collected the shot.

The Belles broke through in the 65th minute as Teichman's corner kick sailed perfectly to Kerry Green, whose header had a straight path to the back of the net to break the 1-1 tie. Less than 15 minutes later, Lindsay Rzpecki carried the ball along the left side of the field past a defender and along the endline until firing a shot from a tight angle into the right-side netting of the goal for the insurance tally in the 79th minute.

Olivet pressured to get back into the game. With just over 10 minutes remaining in the contest, the Comets carried the ball deep into the Saint Mary's half of the field. A Comet offensive player got behind a shot from inside the 18-yard box, but Chanler Rosenbaum had a leaping one-handed punch to hold Olivet's comeback efforts at bay.

Chanler Rosenbaum picked up the win in goal while making two saves and surrendering a goal in 90 minutes of play.