ANGOLA, Ind. - The Saint Mary's soccer team picked up a win in double-overtime with a penalty kick for a 1-0 decision over Trine on Sunday evening. 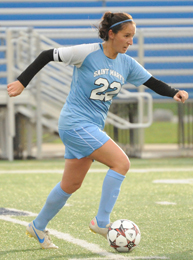 The five overtime conference games is the most played by a Saint Mary's team. The 2003 squad had four conference contests go to extra time for what had previously been the most MIAA overtime games played by a Belles team.

Chanler Rosenbaum had the shutout in goal while making a save on the Thunder's lone shot on goal in the game.

The Belles out-shot Trine by a 17-2 margin and took nine corner kicks to the Thunder's four.

Saint Mary's (5-4-3, 3-2-3 MIAA) begins the second round of conference competition next Saturday, October 12 when they host Kalamazoo for a noon contest.