NOTRE DAME, Ind. - Big offense coupled with solid defense translated into a 5-0 win for the Saint Mary's soccer team over Trine to end the season on Monday evening.

Mollie Valencia (22)
celebrates her goal with
Emily Rompola (13).It did not take the Belles long to get onto the scoreboard as Emily Rompola sent a centering pass from the right sideline to the top of the box, where the pass found Mollie Valencia in-stride with a step on her defender. The senior midfielder sent the effort home for her second goal of the season and 11th of her career in the 10th minute of action for the early Saint Mary's lead.

The Belles continued to hold possession of the ball while not allowing the visiting Thunder to get much of a look at goal in the opening 45 minutes of play. Saint Mary's was able to double their lead in the 35th minute when the ball took a direct deflection off of a central defender for Trine directly to Rosie Biehl on the left side of the box. A touch later, Biehl sent the ball into the far side-netting of the goal for the second strike of the day for the Belles. 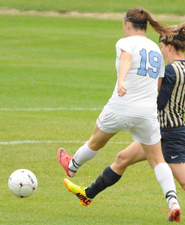 Rosie Biehl (19) scores her
second goal of the game.After the halftime break, Biehl struck again less than two minutes into the second period. Kelly Wilson found some space near the top of the box to send a pass to Biehl on her left side. The freshman notched her second goal of the game with a toe poke just ahead of her defender two steps inside the 18-yard box between the left post and the goalkeeper for the 3-0 Saint Mary's advantage.

The Belles added back-to-back goals in the 73rd and 77th minute to put the game well out of reach for the Thunder. Jordan Diffenderfer saw a header attempt pushed aside, but the ball bounced around inside the box and fell back to the senior forward's feet. On her second effort, Diffenderfer sent a shot off of the Trine goalkeeper's hands and in for the 16th goal of her career. 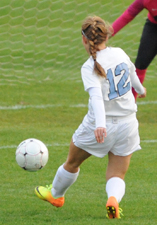 Rachel Schulte (12) sends
her shot in for the fifth goal
of the game.Four minutes later, fellow senior Kaitlin Teichman sent a pass from the center of the Trine defensive half to her left into the box for a wide open Rachel Schulte. Schulte sent a left-footed, 14-yard shot under the crossbar and in for her first goal of the season in the 77th minute.

The best scoring opportunity of the game for the Thunder came with just four minutes remaining in the contest. Trisha King stepped into a shot from 16 yards out, but Natalie Warner raced off the line and made the sliding save to keep the shutout in tact for the Belles.

Saint Mary's out-shot Trine 22-3 for the contest. Valencia's goal in the 11th minute proved to be the game winning strike, giving the senior co-captain eight game-winning goals for her career. Two of those game-winning goals came in each of the Belles' two wins over Trine this season. 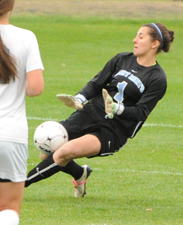 Natalie Warner makes the sliding
save.Chanler Rosenbaum earned the win in goal while playing the opening 53 minutes for the Belles. Natalie Warner picked up a save while closing out the final 37 minutes of play in goal.