Belles Battle Back to Draw Bulldogs

Belles Battle Back to Draw Bulldogs

ADRIAN, Mich. - Facing a late 1-0 deficit, the Saint Mary's soccer team drew even late in regulation and played to a 1-1 double overtime tie against Adrian on Tuesday night.

The Bulldogs put a shot on goal in the opening minute and a half of play only to have Chanler Rosenbaum push the effort aside. 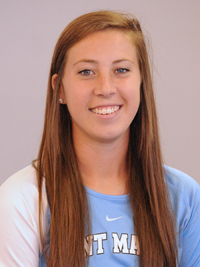 Kerry Green tied the game in the
73rd minute with a goal off of
a corner kick.The Belles earned a corner kick in the 18th minute. Gabby Guerra's cross from the corner found its way to Kerry Green, but the senior center back's header was off the mark and went wide right. Two minutes later, Kathryn Lueking also had a look at goal, but her shot also sailed wide right to keep the game scoreless.

Saint Mary's continued to have some of the better opportunities over the first 45 minutes of play with Green and Rachel Moore each firing shots off the mark in the closing minutes of the period.

In the first six minutes of the second half, the Bulldogs broke through for the game's first goal off of a shot from 15 yards out.

As the half continued on, the Belles continued to push up in combined efforts to get the equalizer. In the 72nd minute, Kathryn Lueking put another shot on goal only to have the attempt saved. Half a minute later, Lindsay Rzepecki got behind a shot, which was blocked out of bounds across the endline for a Saint Mary's corner kick. Once again, Guerra sent the cross off the corner into dangerous territory and found Green inside the box. This time, the senior's header was true as the Belles tied the game 1-1 with 17:31 remaining in regulation.

Saint Mary's had a good look at a potential game-winner in regulation. Guerra had another solid corner kick, but Jenn Jarmy's shot inside the box was saved in the 76th minute.

In the first overtime, Kerry Green put a pair of shots on goal, but both were saved by the Bulldogs' goalkeeper. The Belles defense, meanwhile, held Adrian at bay in the first extra period as the Bulldogs were unable to register a shot.

The stage was set early in the second overtime for another Guerra-to-Green corner combination, but Green's header sailed high in the 103rd minute of play. The Bulldogs earned their only corner kick in the waning minutes of the second overtime period, but Chanler Rosenbaum came up with another save on a shot from inside the box to preserve the tie late.

Saint Mary's held a 14-8 advantage in shots and a 7-3 margin in shots on goal in the double overtime tie.

The Belles (3-7-1, 1-5-1 MIAA) return home to host Trine on Saturday, October 4 for a conference game beginning at noon.