Belles Tripped Up by Bulldogs in Overtime on Senior Day

Belles Tripped Up by Bulldogs in Overtime on Senior Day

The nine seniors on the soccer team were recognized prior to the start of the game.

The Belles came out and put a lot of pressure on the Adrian defense early. In the fifth minute of play, Erin Mishu played a cross from the right side of the field into the penalty area where she barely missed connecting with Chanler Rosenbaum inside the six-yard box. A few minutes later, the roles reversed as Rosenbaum played a strong, low pass from a step off the endline on the right side of the field toward the face of the goal where Mishu was standing only to have the cross attempt cut off by the Bulldogs' goalkeeper.

Less than two minutes later, Kerry Green took a free kick from 35 yards out in the Belles' offensive end and placed the ball well into dangerous territory. Surrounded by a handful of Saint Mary's players, the Adrian goalkeeper collected the deflected offering from Green before anyone for the Belles could put enough behind the ball to get it into the goal.

The Bulldogs broke the scoreless tie in the 25th minute. A pass slotted from the midfield found its way to an Adrian forward along the right side of the field who then had an open look at goal and scored from inside the penalty area to give the Bulldogs the 1-0 advantage.

The Belles made a strong push late in the half while working to get the equalizer. Gabby Guerra took the team's first corner kick of the game and put the ball in front of the mouth of the goal. Lindsay Rzpecki got a head on the ball only to see her shot hit the crossbar. The ensuing rebound landed at Kate Vasile's feet, but the sophomore's strike sailed high. 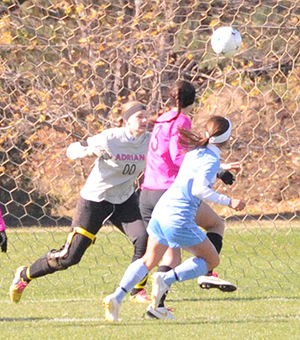 Baylee Adams watches as her shot goes into the
goal to tie the game 1-1.After the halftime break, it did not take long for the Belles to tie the game at 1-1. Baylee Adams fought for the ball inside the six-yard box and got off a shot with a pair of defenders nearby. Adams had her initial shot stopped, but the ball came right back to her feet and her second effort was true as she knotted the game at a goal apiece.

Both teams both had some chances over the final thirty minutes of regulation. With more than 26 minutes left, Courtney Wright played a ball up to Liza Felix only to have the ball picked up by the goalkeeper ahead of Felix. As the clock neared the 19 minute mark on the scoreboard, Felix played a ball from the center of the field forward to Erin Mishu, who collected and settled the ball quickly. On her turn toward goal, however, the senior had the Adrian defense clamp down and cut the ball off from her touch.

With the clock winding down below the two-minute mark, Felix had another look at goal. The sophomore fired a shot from the top of the 18-yard box while having a good amount of free space. Her shot was pushed away to keep the game deadlocked at 1-1.

In the opening minutes of extra time, the Belles played the ball forward and drew the Adrian goalkeeper well off her line only to have the effort stifled. With the clock nearing the one-minute mark in overtime, the Bulldogs took the strike that made the difference as Adrian scored the sudden-victory goal from well outside the penalty area in the 99th minute.

Adams's goal was the first of her collegiate career. Chanler Rosenbaum had five saves, Nicole Papiernik added two stops, and Natalie Warner picked up a save as well for the Belles as the trio of seniors split time in goal on the day.