The Belles put some early pressure on the Flying Dutch in the game. Just over a minute into play, Emily Rompola took a mid-distance shot that was blocked, and Jenn Jarmy had a strike blocked across the endline for the Saint Mary's corner kick just past the three-minute mark. On the ensuing corner, Kerry Green was able to elevate and get a head on the ball, but her effort was off the mark and wide left.

The momentum shifted in favor of the Flying Dutch as Hope was able to control possession of the ball for long stretches of time. The visiting Flying Dutch took advantage of their second corner kick of the day after a player maneuvered free in the box and had a one-time shot off the corner for the 1-0 lead in the 19th minute. 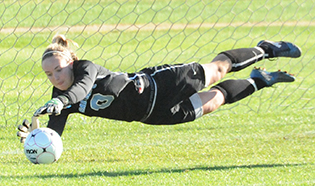 Chanler Rosenbaum makes one of her season-high
11 saves on Wednesday.The Belles had four strong opportunities down the stretch in the first half. In the 26th minute, Mary Kate Hussey carried the ball forward and played a pass into the middle of the box for Jenn Jarmy. Jarmy, however, was stopped short of reaching the ball as the Hope goalkeeper came off her line to collect the pass a step ahead of the sophomore.

Less than ten minutes later, Hussey gained possession in the middle of her defensive half, cut through the Hope midfield, and had the ball at the edge of the 18-yard box in the Belles' offensive zone, but her look for another offensive player was intercepted by the Flying Dutch back line. A minute later, Rompola had a clear look at goal from 30 yards out and sent a shot on goal only to have it collected by the goalkeeper.

In the waning minutes of the half, Liza Felix found herself with the ball a few yards into the offensive half of the field with the Belles pushing numbers forward and looking at a possible three-on-two in transition. Her slot pass forward, however, was taken over by Hope's center back.

Lindsay Rzepecki and Erin Mishu each played a ball forward and into dangerous position in the second half for the Belles. Rzpecki sent a pass well inside the 18-yard box where Mishu barely missed the connection in the 58th minute as the Hope goalkeeper was able to corral the offering. In the 66th minute, Mishu played the ball from 35 yards out in to prime scoring territory toward Liza Felix only to have the Flying Dutch goalkeeper break up the play.

Two minutes later, the Flying Dutch doubled their lead in the 68th minute with a header from two yards off the far-right post off of a pass from a free kick on the left flank.

Chanler Rosenbaum had a season-high 11 saves in goal for the Belles. Lindsay Rzepecki and Emily Rompola each had two shots for Saint Mary's.