Belles Shut Out by Hornets

Belles Shut Out by Hornets

The host Hornets broke through for the game's only goal in the 26th minute with a shot from the top of the box that traveled just inside the left post. 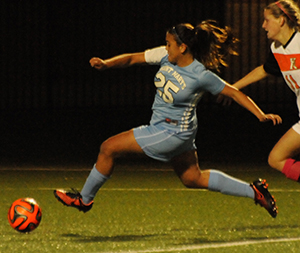 Liza Felix prepares to send a sliding-shot toward
goal in the 75th minute.The most threatening opportunities for the Belles all came in the second half of play on Friday night. Perhaps the best of those chances came early in the 75th minute of play. Jenn Jarmy gained possession of the ball just outside the center circle in the Belles' offensive end of play. After two touches, she threaded a pass through the defense and ahead to Liza Felix. Felix had a step on her defender as the ball rolled ahead of her and into the box. The sophomore closed the gap to the ball as the Kalamazoo goalkeeper ran off her line and timed a sliding shot perfectly only to have her effort travel less than a yard to the outside of the left post.

Back to back opportunities then came for the Belles in the closing minutes of play. Kerry Green had a well-struck ball on a free kick from distance in the 88th minute only to have the offering snagged on the fly by the Hornets goalkeeper. A minute later, Felix was able to get her head on a ball in the air well inside the 18-yard box, but her far-post flick was also gathered up by the Kalamazoo keeper late.