NOTRE DAME, Ind. - The Saint Mary's soccer team suffered a 2-1 loss at home against Kalamazoo in the Belles' conference opener on Thursday afternoon.

The visiting Hornets took advantage of gusty winds in the opening two minutes of play. Kalamazoo switched the ball from left to right, and a mid-range shot from the edge of the 18-yard box carried to the far post and into the goal 1:59 into the game for the early 1-0 Hornet lead. Less than five minutes later, the Belles had a good look at squaring the score at 1-1 after a loose ball bounced through the six-yard box. None of the players up top for Saint Mary's, however, were able to get a foot on the ball as the scoring opportunity dissipated. 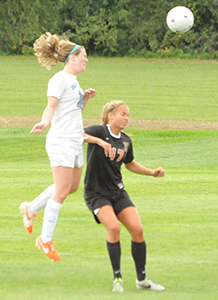 Mary Kate Hussey heads the ball
past a defender on its way in for
the Belles' goal.The Belles stayed within striking distance as the defense cleared away several chances and Chanler Rosenbaum came up with three saves. Saint Mary's later capitalized on their first corner kick of the afternoon. Emily Rompola crossed the corner kick into the box and right at the penalty kick spot. Mary Kate Hussey timed the ball perfectly and sent a header into the upper 90 of the goal to tie the game 1-1 with 12:21 remaining before halftime.

Saint Mary's came out of the halftime break and were the aggressors early. Emily Rompola had a long-distance shot saved just off the right post, and Kathryn Lueking's attempt three and a half minutes later was off the mark. The Hornets also had an early look at pulling ahead, but a cross from deep in the Kalamazoo offensive end was cut off by Rosenbaum.

Less than fourteen minutes into the second half, Kalamazoo scored what proved to be the deciding goal. The Hornets' pushed a handful of players up high into the offensive zone and were able to get a shot off from the top of the box. Rosenbaum made a dive to her right for the save, but the ball deflected off the crossbar and fell to the feet of an open Kalamazoo player inside the penalty area for the one-time shot and score.

The Belles worked to try to find another tying goal. One of the best scoring opportunities for Saint Mary's came with 27 minutes left in the half when Erin Mishu dribbled along the endline and crossed the ball to the front of the goal, but her teammates were unable to get a touch on the ball before it was picked up by the Kalamazoo goalkeeper. Saint Mary's earned a pair of free kicks just outside the 18-yard box as well as a pair of free kicks a few yards into their offensive zone over the final 30 minutes of play, but only one of those chances translated into a shot on goal.

Chanler Rosenbaum made seven saves in goal on the night.