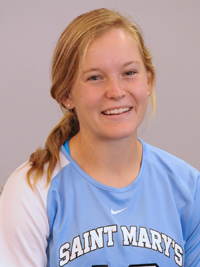 Kathryn Lueking, Abby Garcia, and McLaughlin each added shots on goal over the final 36:30 of the first half, but each of those three efforts was turned aside by the Comets' goalkeeper.

Olivet came out of the halftime break and put three shots on goal in the opening fourteen minutes of action. Chanler Rosenbaum came up with three saves to keep the game deadlocked at one goal apiece.

The game remained knotted at 1-1 until the 77th minute when the host Comets got the game-winner. Olivet put a shot off the crossbar, and Rosenbaum saved to follow-up shot out of bounds. On the ensuing corner kick, the Comets broke through with the decisive goal.

The Belles' best look at another equalizer came in the 89th minute of play as Erin Mishu registered a shot on goal, but the effort was stopped with a save as the Comets held on late.

Chanler Rosenbaum made six saves in goal for the Belles.