The Belles came out with a lot of energy with the opening whistle. In the third minute of action, Saint Mary's had their first of several strong opportunities when Kerry Green played the ball up over the middle of the Olivet midfield and defense to Liza Felix at the top of the 18-yard box. Felix, however, was unable to get a clean touch on the ball as the effort rolled forward to the goalkeeper. 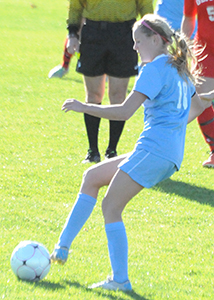 Maggie McLaughlin was one of three
players with two shots for the Belles.In the 13th minute of play, Felix was on the passing end of a centering-cross from the right side of the field with Erin Mishu as her intended target at the edge of the six-yard box. The cross, however, was cut off by the Olivet goalkeeper to keep the game at 0-0.

Mary Kate Hussey hit a pass to Maggie McLaughlin in the 32nd minute, and the junior got off a shot from close range on her first touch on the ball. McLaughlin's shot had the goalkeeper beat, but the effort rolled just wide right of the post and out for the goal kick. Less than a minute later, Mishu put a shot on goal from the top of the 18, but the effort was collected on the goal line.

Using the wind to their advantage in the first half of play, the visiting Comets got on the scoreboard shortly before the halftime break. On their fourth corner kick of the half, the Comets saw the cross-turned-shot on the corner arc high to the inside of the far post and into goal for the 1-0 advantage in the 44th minute.

In the first five minutes of the second period, the Belles put a shot high and saw another effort stopped with a save with Felix and Jenn Jarmy gaining credit for the shots, respectively. A short time later in the 50th minute, Mishu crossed the ball from the left end line along the ground and through the box only to have the pass picked up by a defender in front of the far post.

A short while later, Liza Felix played a ball from the right side of the penalty area into the box where Erin Mishu was unable to get enough redirection on the ball as it traveled away from her despite having beaten the goalkeeper and the Olivet defense. On the Belles' second corner kick of the period, Emily Rompola's cross carried past the far post to an open Kerry Green. But the senior's header was picked up by the Comets' goalkeeper to keep the Belles off the scoreboard.

Olivet pushed their lead to 2-0 in the 70th minute with a goal on transition. After the Comet goalkeeper made a save and punted the ball away, Olivet had a midfielder play the ball quickly forward to a player up top who ran onto the pass and sent a one-time shot just below the crossbar and in for the goal.

The Belles continued to push forward looking to cut into Olivet's lead. Jarmy had an effort miss the goal by less than a yard as it barely sailed high and right of the frame at the start of the 74th minute of play. Liza Felix saw her shot from inside the penalty area beat the defense but glance off the post and out of bounds in the 88th minute of the game for the Belles' last strong look at goal.

Jenn Jarmy, Maggie McLaughlin, and Liza Felix each had two shots for the Belles in the game. Chanler Rosenbaum made seven saves in goal while shouldering the loss.

The Belles have their final home game of the season on Saturday, November 1 when they host Adrian at 12:00 p.m.