Belles Close Out Season With Scoreless Draw at Trine

Belles Close Out Season With Scoreless Draw at Trine

ANGOLA, Ind. - The Saint Mary's soccer team ended their 2014 season with a 0-0 double overtime tie at Trine on Monday evening. 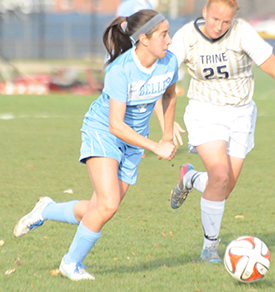 Kelly Wilson led the Belles with three shots.The Belles had a handful of potential scoring opportunities in the opening 45 minutes of play. Pushing forward into the wind, Kerry Green took a free kick in the 10th minute and sent it into the box toward Kelly Wilson, but the senior's header flick on the pass went wide left of the goal for the Trine goal kick.

Less than seven minutes later, Gabby Guerra found the ball at her feet with some space a few yards outside of the 18-yard box. The freshman put a strong shot toward the upper left corner of the goal, but her effort was stopped short from putting the Belles on the scoreboard.

Continuing to put pressure on the Trine defense, the Belles nearly took advantage of a miscue by the Thunder's back line in the 32nd minute. Natalie Warner was shoulder to shoulder with a defender in a foot race for the ball in the middle of the Trine backfield. As the Trine defender played a pass back to the goalkeeper, the Thunder's netminder had a poor touch with her feet. The Belles were unable to close ground and get to the ball in time as the defense recovered late to play the ball away.

With just over five minutes remaining before the break, Wilson gained control of the ball at the top of the box, took a touch forward, and curled around a right-footed shot before the defense could step to her, but her shot traveled less than a yard high and right of the upper 90 of the goal frame.

As the clock wound down near the final minute of the first half, the Belles earned a free kick less than a foot outside of the penalty area on the left side of the field. Green sent another solid pass into the box where Natalie Warner was able to get a head on the ball, but the attempt rolled wide right of the goal to keep the game scoreless at the half.

In the 59th minute, it appeared as though the Thunder would be the side to get the fortunate bounce as a ball played forward landed at the feet of a forward a step ahead of the Belles' defense inside the 18-yard box. The Trine thunder took a low shot from the right side and sent it to the far post, but Chanler Rosenbaum made a move to her right and was able to smother the attempt to keep the game scoreless.

Midway through the second period, the Belles earned another free kick. Again, Green was able to put the ball in dangerous territory well inside the six-yard box. This time, the Trine goalkeeper took a few steps off her line and punched the ball away.

In the 71st minute of play, Liza Felix tracked down the ball near the end line and sent a solid cross in toward the mouth of the goal from the right side of the field where four Belles were all looking to get on the receiving end of the pass. Again, however, Trine's goalkeeper was able to get a jump on the ball and cut of the cross.

In the first overtime, Wilson and Felix nearly connected for the decisive blow. With a little more than a minute left in the period, Wilson lobbed a pass up over the Trine defense. It appeared that Felix had a step on her defender and would have a one-on-one opportunity against the goalkeeper, but the ball took an unfortunate bounce away from the forward as Trine was able to play the ball away.

Chanler Rosenbaum made four saves.Early in the second overtime, Erin Mishu received a pass, turned, and carried the ball forward toward the top of the 18 only to have a pair of defenders collapse and cut off her look at goal.

Felix nearly had the same opportunity from the end of the first overtime develop with more than two minutes on the clock in the second overtime as the Belles looked to transition quickly from defense to offense. Courtney Wright played a long ball from the middle of the field forward, where Felix read the bounce and allowed the ball to advance before taking on a defender one-on-one. The offensive chance failed to yield a shot on goal, but the Belles kept the pressure high on the Thunder defense.

A throw in during the final minute of play bounced off of a few different players and went out of bounds for the Trine goal kick. As the final seconds ticked off the clock, Mishu sent one last shot from a great distance from goal, but the effort was too much from too far too late in the game as the clock expired.

Kelly Wilson led the Belles with three shots in the game while Kerry Green and Gabby Guerra each added two. Chanler Rosenbaum made four saves in goal while securing her 19th career shutout.