ADRIAN, Mich. - The Saint Mary's soccer team earned their first shutout of the year while playing to a 0-0 double overtime tie at Adrian on Tuesday night.

The Belles had the higher number of strong scoring chances on the night while also having several additional sequences of passes and stretches of possession and pressure which were unable to materialize into goal scoring opportunities. 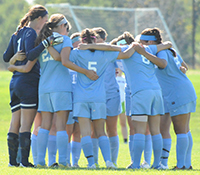 In the first half, the Belles earned a corner kick in the opening 10 minutes of the contest. Liza Felix took the corner kick and sent the ball past much of the Adrian defense toward the far post. Maggie McLaughlin was able to get a head on the ball, but her flick shot attempt went wide left. Jenn Jarmy later found herself in some space near the right endline, but the junior's strike carried high and beyond the far post on another dangerous possession by Saint Mary's. As the clock moved past the midway point of the half, Emily Beedie fired a shot with the wind at her back from 35 yards out only to have her effort saved.

The Bulldogs had one of their best chances two minutes after Beedie's strike. Adrian had a quick transition and a fortunate bounce turn into what appeared to be a breakaway opportunity past the Belles' defense. Rachel McCarthy was quick to come off her line for the challenge, but the Adrian player was whistled for being offside as goalkeeping heroics were all for naught on the play.

The second period saw the Belles continue to press high against the Adrian defense. Jarmy connected a pass from the right side of the field into the middle to Lindsay Rzepecki. The senior then played the ball on to her left before lofting a pass up toward Baylee Adams, but as the ball came down on what appeared to be a promising sequence, an Adrian defender cleared the ball away just before Adams could get a touch or a shot off inside the 18 yard box.

With under 30 minutes remaining in regulation, Jarmy and McLaughlin each contributed to additional scoring chances. Jarmy played the ball into some space for McLaughlin, but the senior's one-time shot from 15 yards away went directly to the goalkeeper. A minute later, Felix dropped a pass back to Jarmy, but Jarmy's shot from the top right corner of the 18 yard box was collected on a two-hop save.

The Belles' best scoring chance of the second half came with just over 12 minutes left in the period. After a sustained possession, the Belles played consecutive flicks in toward the goal from the right side of the field. The ball found its way to Lindsay Rzepecki well inside the scoring area. Rzepecki kept the ball low and fired a shot only to have it played away from the goal by a defender to stop the potential game-winner from going in late in the half. Five minutes later, Brianna Hart tried to take advantage of the Bulldogs being back on their heels with a long-range shot which was headed inside the right post, but Adrian's goalkeeper was able to backtrack just enough to make the save a step off the goal line.

In the first overtime, the Belles nearly ended the contest with two minutes left on the clock. Lindsay Rzepecki played a pass to the left flank to Jenn Jarmy. Jarmy took a touch and cut between two defenders before firing a low shot toward goal from close range. The shot bounced off the Adrian goalkeeper's chest and remained in play. Maggie McLaughlin raced in to try to tap in the rebound, but her effort rolled just wide left as the game stayed alive.

The second overtime saw Saint Mary's continue to find energy to pressure the Adrian defense. In the opening two minutes, Liza Felix nearly had a breakaway opportunity only to see the initial pass beyond the defense roll too far ahead for the Adrian goalkeeper to pick up a step inside the 18 yard box.

The Belles earned a corner kick early in the period but were unable to get off a shot on a well-played ball by Liza Felix. A short time later, the Bulldogs looked to turn a change of possession of the ball deep in their defensive end into a potential game-ending breakaway heading the other direction. Emily Rompola, however, saw to the end of that chance quickly as her one-on-one challenge resulted in the ball being sent back to the Belles' offensive end of the field.

Adrian had two scoring chances late in the second overtime period, but the first of those chances was blocked while the other rolled wide left of the post late for the 0-0 final.

Jenn Jarmy helped pace the Belles with four shots on the night, two of which were on goal. Maggie McLaughlin added four shots, and Lindsay Rzepecki chipped in a pair of shots on goal. Rachel McCarthy earned her first shutout in goal for the Belles while making three saves.