Belles Shut Out by Knights

Belles Shut Out by Knights

SOUTH BEND, Ind. - The Saint Mary's soccer team fell in a 3-0 final against Calvin in conference play on Wednesday evening.

The visiting Knights claimed a 1-0 lead in the eleventh minute of play, but the Belles continued to battle for opportunities to tie the game. A few minutes after the Calvin goal, Emily Rompola sent a long ball in toward the box for Baylee Adams. Before the sophomore was able to get a touch on the ball, however, the Knights' goalkeeper came off her line to intercept the pass and stop the threat.

Six minutes later, Rompola was again on the back side of a pass beyond the back line of Calvin's defense. This time, Liza Felix was her target. As the ball came down to the ground, Felix was unable to shake past the final defender while the goalkeeper again came forward to pick up the ball. 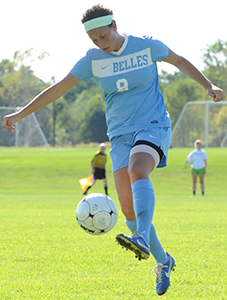 Jenn Jarmy settles the ball in the
first half.Barely a minute later, the Belles put together their best sequence of passes of the opening period and nearly capitalized on the possession. Jenn Jarmy gained possession of the ball just inside the offensive half of the field for the Belles. She played the ball forward to Felix, who then caught Jarmy along the right sideline in the middle of a strong run. Jarmy cut up the field and along the endline before sending a cross into the box. The ball traveled from the right endline to the left post, where Shelby Cox got a solid shot off. The freshman's strike, however, was saved just before crossing the goal line.

The Knights added a second goal with just under ten minutes left on the clock before halftime, but the Belles were undeterred. Jarmy was able to win the Belles a corner kick in the opening two minutes of the period as Saint Mary's put a lot of pressure up high. The ensuing ball played by Rachel Moore was well-placed inside the scoring area, but the Calvin defense was able to clear the ball away from the front of the goal. Two minutes later, Jarmy got off an ambitious shot from mid-range, but her strike carried high over the crossbar and out for the goal kick.

In the 56th minute, Jarmy had the best chance of the second half to get the Belles on the scoreboard. The junior blasted a shot from inside the 18-yard box in the middle of the field only to see the strike go directly at the Calvin goalkeeper for the head-height save.

The visiting Knights added a goal in the 80th minute of play to take the 3-0 decision.