SOUTH BEND, Ind. - The Saint Mary's soccer team held their own before falling by a 3-1 final against Hope on Tuesday. Hope has conceded just nine goals in 15 MIAA contests this season with the Belles picking up one of those goals this evening. 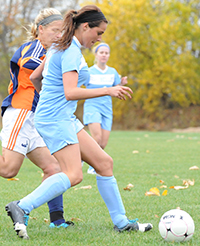 Rachel Moore scored the Belles'
goal on Tuesday in the fifth
minute.The Flying Dutch scored in the opening two minutes, but the Belles took little time to draw back even with Hope. In the fifth minute, Jenn Jarmy made a long throw in from the right side of the field into the 18-yard box. After a pair of bounces, it landed in front of Rachel Moore, and the defender sent home the mid-range shot to knot the score at 1-1.

Pushing the tempo of the game up a notch, the Flying Dutch tried to overtake the Belles. The defense was up to the task and limited Hope's scoring chances to just four shots on goal for the opening 45 minutes of play. With under seven minutes before the halftime break, the Belles pushed the ball ahead on a free kick by Emily Rompola. The ball was headed three consecutive times by Saint Mary's players until it settled on the ground near Baylee Adams. The sophomore took a shot from the top of the 18-yard box, but the low strike rolled directly to the Hope keeper.

A minute after that shot, the Flying Dutch capitalized on their final shot on goal of the half with the go-ahead score with 5:34 left on the clock before the break. Hope added an insurance goal in the 50th minute of play to pull ahead 3-1, but the Belles were not ready to throw in the towel.

The best opportunities for Saint Mary's all came in the final 12 minutes of play. Jenn Jarmy had a pair of long passes deep in the Belles' offensive end that just missed their intended targets and were played away. With over six minutes remaining, Jarmy was on the receiving end of a pass on the offensive half of the field. She shielded her defender with her back toward the goal as offensive support pushed up field. Jarmy then turned and threaded a pass directly up the middle of the field toward Brianna Hart. The pass was a yard too long for Hart as a defender came over to help double up the play and clear the ball away from danger.

Less than a minute later, Kate Vasile worked her way free along the left endline in the Belles' offensive end and sent off a solid cross in toward the front of the goal only to see the Hope goalkeeper punch the ball away from a pair of Saint Mary's players inside the six-yard box as the 3-1 score held for the final line.

Rachel Moore scored her first goal of the season and the second of her career for the Belles. Jenn Jarmy was credited with the assist on the goal - her first assist of the year. Liza Felix made a pair of saves in goal for Saint Mary's.

The Belles (2-13-1, 2-11-1 MIAA) host Adrian on Saturday beginning at 12:00 p.m. The three members of the senior class - Kathryn Lueking, Maggie McLaughlin, and Lindsay Rzepecki - will be recognized prior to the start of the game.