SOUTH BEND, Ind. - The Saint Mary's soccer team ended on the short side of a 1-0 final against Manchester on Saturday afternoon. 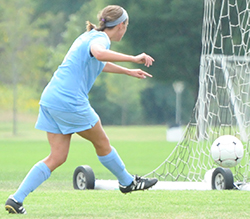 Kate Vasile fires a shot in the second half.The start time of the game was delayed by an hour and a half due to lightning and thunderstorms in the area. After the storms passed, the Belles nearly got on the scoreboard in the first minute of play. A handball gave Saint Mary's a free kick from 25 yards out along the right side of the field, and Emily Rompola's strike was on the mark but was collected by the goalkeeper.

The Belles continued to keep the pressure high on the Spartans' defense throughout much of the opening ten minutes of play. Several dangerous crosses into the box were cut off by the Manchester goalkeeper to keep the game scoreless.

Midway through the first half, Manchester had their first strong scoring opportunity halted inside the penalty area. A pass was played near the edge of the six-yard box, but Lindsay Rzepecki was able to clear the ball away before any Manchester player could strike from close range.

Manchester broke the deadlock with less than ten minutes remaining before halftime. The Spartans' Bethany Molnar carried the ball up along the right side of the field and crossed the ball in front of the face of the goal where Mariam Aly was able to get a half-volley toe poke on the ball and score.

The Belles had two strong scoring chances in the early minutes of the second period. Lizzie Cusick played the ball up and over the defense for Liza Felix to run on to the pass in the first five minutes. Felix got to the ball just ahead of the Manchester goalkeeper and pushed it around her. That push around, however, had too much speed on it and carried past the left post of the goal and wide.

Five minutes later, it appeared that a 3-on-1 breakaway opportunity might have been developing. But the Spartan goalkeeper was able to regain possession for Manchester on a ball that was played too far ahead as the play was unable to materialize.

In the 65th minute, Kate Vasile played a ball that looked to have gone of its mark and had a one-time shot go into the back of the net only to have the goal disallowed on an offside whistle.

The Belles continued to press for the equalizer. Vasile sent another shot wide of the left post, and Mary Kate McCarthy had a shot from distance saved as the comeback effort was stopped short.

Kate Vasile led the Belles with two shots while six players each registered a shot for Saint Mary's. Cara Givens made a pair of saves in goal. As a team, the Belles out-shot Manchester by an 8-7 margin while holding a 4-3 edge in shots on goal.

The Belles (0-2) open up conference play on Wednesday, September 9 when they host Albion at the Junior Irish Airport Fields at 4:00 p.m.