ANGOLA, Ind. - The Saint Mary's soccer team held off a late push by host Trine to take a 2-1 win over the Thunder on Saturday afternoon.

Playing into the wind for the first half, the Belles were able to maintain long stretches of possession in their offensive end of the field against the Thunder. Saint Mary's put a handful of shots on goal through the first 20 minutes of play, and it appeared it was merely a matter of time until the Belles found the back of the net. 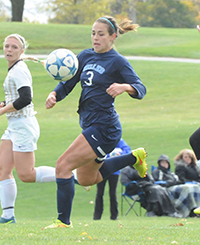 Rzepecki receives Cusick's pass
before scoring in the first half.That first goal came in the 29th minute of play. After Rachel Moore took a throw in along the left side of the field, Lizzie Cusick lofted a pass into the box toward the penalty spot. Lindsay Rzepecki ran onto the pass, shielded a defender, and sent home her second goal of the season to put the Belles up 1-0.

Saint Mary's continued to threaten to widen the lead, but none of the Belles' chances materialized into strong scoring opportunities over the final 15 minutes of the opening half. On the defensive end of the field, the Belles made things difficult for the Thunder. Trine registered just five shots over the opening 45 minutes with two of those shots being on goal. Both were fairly straightforward saves for Rachel McCarthy as the Belles' backline forced the Thunder into long shots.

McCarthy opened up the second half with two more saves to maintain the 1-0 lead for Saint Mary's. As the period reached its midpoint, the Belles began to take over control of the ball and the game yet again. Mary Kate McCarthy and Rzepecki each put a shot on goal to start the shift from defense to offense in the half. 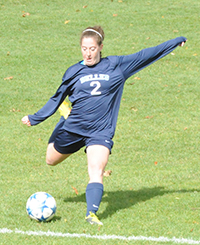 McCarthy shoots what proved to
be the game-winner.After Rzepecki's shot, the Trine goalkeeper went to clear the ball out of her end of the field. The clear, however, was played directly to Mary Kate McCarthy at the top of the 18-yard box. The freshman settled the ball and sent a shot inside the far post as the Thunder keeper was still off her line for the open goal to put the Belles up 2-0 in the 65th minute.

The Thunder took little time to cut the lead in half. On their second corner kick of the half, a loose ball on a blocked shot fell at an open forward's feet. The close-range shot would have taken a perfect combination of location, timing, and speed to stop as Trine made it a 2-1 game with less than 22 minutes remaining in regulation.

The Belles defense dug in their heels and staved off a corner kick with ten minutes remaining in the game while holding the Thunder to zero shots on goal over the final 20 minutes of play. At the other end of the field, the offense was able to win and maintain possession for long stretches of time as the Belles held on for the 2-1 win.

Lindsay Rzepecki registered her second goal of the year. Mary Kate McCarthy scored the first goal of her collegiate career, which also proved to be the game-winner for the Belles. Lizzie Cusick picked up an assist on Rzepecki's first-half goal. Rachel McCarthy made four saves.

The Belles (2-11-1, 2-9-1 MIAA) are next in action on Saturday, October 24 when they travel to Calvin for a noon contest against the Knights.