SOUTH BEND, Ind. - A four-goal outburst was more than enough to lift the Saint Mary's soccer team to their first win of the 2014 campaign as the Belles topped Trine by a 4-1 final on Thursday evening.

The Thunder claimed an early lead with a goal by Gigi Jarratt in the 11th minute, but the Belles were undeterred in their efforts despite the quick setback. As the half wore on, the Saint Mary's pressure pushed higher and higher against the Trine back line. Liza Felix made a nearly immediate impact on the game after substituting on to the field in the 26th minute. Not even sixty seconds went by before the junior knotted the game up as Felix was on the receiving end of a cross into the box from Lindsay Rzpecki. Felix settled the cross and sent a shot off the hands of the Thunder goalkeeper to tie the game at 1-1. 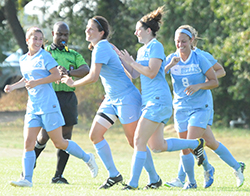 Emily Rompola (second from left)
celebrates her second goal.The Belles continued to knock on the door over the final 15 minutes of the half. Saint Mary's earned three consecutive corner kicks in the span of 53 seconds. The last of those corner kicks resulted in a slight melee in the box where the ball bounced from foot to foot until Jenn Jarmy had the clearest look at goal but was unable to get off a shot. Two minutes later, Jarmy sent a rocket of a shot toward goal only to see the ball bounce off the inside of the left post. Felix had a chance at the resulting rebound, but her strike sailed off to the right of the goal.

With eight minutes to go before the half, Mary Kate McCarthy subbed into the game and nearly netted the go-ahead goal. The freshman had an open goal to shoot at after the Trine goalkeeper came off her line to try to play the ball, but McCarthy's strike had too much spin and went left of the goal.

At the other end of the field, Rachel McCarthy came up with a save late in the half to keep the tie in tact going to the break. One of the Thunder forwards had the ball at her feet less than six yards away from the goal line, but McCarthy made a diving stop to her left to deny the scoring chance with under four minutes left on the clock.

The Belles picked up right where they had left off in terms of energy and pressure in the second half. Felix had a dangerous cross cut off by the goalkeeper, and Jarmy was whistled for being offside on what would have been the go-ahead goal. Emily Rompola had a solid strike on a free kick from distance denied by the goalkeeper, and Rachel Moore's shot on the rebound was blocked in the box as Saint Mary's continued to push for a goal.

Shortly after returning to the field, Baylee Adams lofted a cross from the right side of the field in toward the left post. The cross was deflected out of bounds to earn the Belles their first corner kick of the half in the 76th minute. Rachel Moore sent a well-placed cross into dangerous territory on the corner kick, and Emily Rompola was able to elevate and head a shot into the near post for her first goal of the season to put the Belles up 2-1.

That combination of Adams, Moore, and Rompola was far from finished for Saint Mary's. Eight minutes later, Moore again arced a corner kick into the box. Adams played the ball from the far post back toward the middle of the six-yard box where Rompola sent home her second goal of the game to make it a 3-1 contest in favor of the Belles. The two-goal output is the first time in Rompola's collegiate career she has scored multiple goals in a single game.

With the game all but wrapped up, the Belles were not quite done with the offense. As the game neared its end, Maggie McLaughlin found the ball at her feet in the center of the field with a lot of space. The senior carried the ball quickly up the middle of the field before playing a perfect pass to her right to a wide-open Kate Vasile. Vasile had no trouble getting a good shot off as she put the ball home inside the far left post with nine seconds left in the game for the 4-1 final.

Rachel McCarthy made five saves while earning her first win in goal for the Belles. Emily Rompola doubled her career goal total with a pair of goals, including the game-winning strike. Rachel Moore picked up the first two assists of her career while Baylee Adams tallied her first collegiate assist. Kate Vasile notched her first collegiate goal. Liza Felix upped her career goal total to three with the first goal of the game for the Belles.