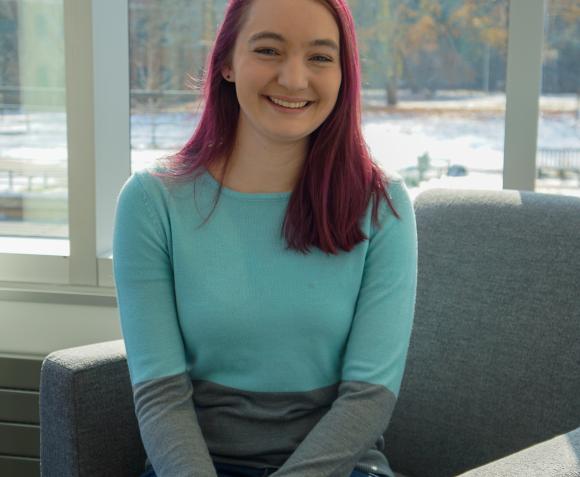 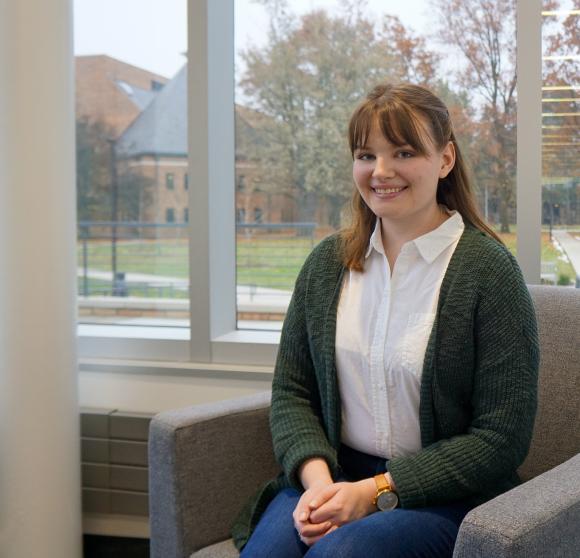 Elizabeth Ferry '20 was no stranger to Saint Mary’s when she first stepped foot on campus. Although she had never been to campus before her senior year of high school, she had grown up hearing about the beauty of Lake Marion and the magnificence of Le Mans Hall from alumnae. When Elizabeth was in high school, she attended Notre Dame Vision, a summer camp of faith for Catholic teenagers from all around the country. Some of ND Vision’s mentors were Belles and Elizabeth would never forget their enthusiasm for their College.

“Just hearing them talk about Saint Mary’s, I could see how much they loved their school.”

And when Elizabeth did finally tour Saint Mary’s, she, too, fell in love.  “I stepped on campus and I could just feel this overwhelming sense of hope...this campus has something magical to it. That was the first college tour I went on, so then for every tour I went on, I’d just say, ‘well, this doesn’t feel like Saint Mary’s.’”

Elizabeth always knew she wanted to study history in college, and she was even thinking about becoming a history teacher, although, she wanted to do something outside the traditional classroom setting. So, during her first year at Saint Mary’s, Elizabeth went to the Career Crossings office to talk about her dreams, her majors, and her desire to facilitate interactions between people and history. While there, Elizabeth was able to use the Alumnae Resource Network to view all the alumnae working in museums; the majority of those alumnae, it turned out, were humanistic studies majors.

So, Elizabeth took one humanistic studies (HUST) class and halfway through, she knew she wanted to declare it as a second major. Elizabeth feels that the Alumnae Resource Network was instrumental in her decision.

“Women that go to Saint Mary’s are so passionate about their school, because this is not just a place you go to get an education,” she said. “The women that graduate from here have such a connection to Saint Mary’s, and they’re willing to help out other Belles because there’s a sense of sisterhood here that transcends graduation.”

So, what is HUST? Elizabeth said humanistic studies is the history of the Western canon, a body of work including literature, art, philosophy, and music which is prized in Western society. The HUST major requires students to take eight courses in tandem, or pairs, that start their junior year. The courses begin with teachings centered around ancient Greece and Rome and progress to the early modern era.

“It’s not just history and literature, either, we also take a look at art and architecture, listen to music, and talk about philosophy, politics, and religion. It’s basically the history of everything. Saint Mary’s promises you discovery, and HUST is pretty much the discovery of the world.”

Since double majoring in both humanistic studies and history, Elizabeth has had several opportunities to intern at museums, including the Lucille Ball Desi Arnaz Museum in Jamestown, NY, and at the Frank Lloyd Wright Home and Studio in Oak Park, IL.

“Saint Mary’s actually funded my internships because they weren’t paid,” Elizabeth said. “They recognized that they could’ve been a barrier for me, so they did their best to help make it happen.”

As for advice, Elizabeth encourages students to seek out more experiences and opportunities that may take them outside their comfort zones by sharing “The more classes you take, the more perspectives you can get, the better,” she said. “You’ll understand the world and the people in it a lot better, and in the end, you’ll be more successful.”

Preparing to graduate shortly, Elizabeth is currently discerning her grad school options and looking for work in museums in Chicago.