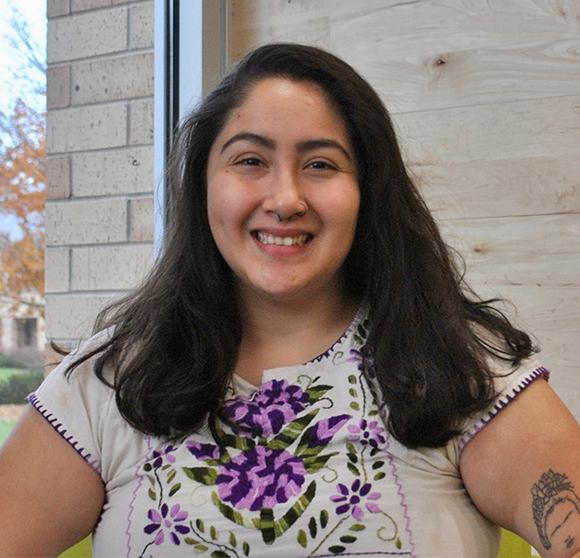 What initially led Genesis Vasquez to consider Saint Mary’s College was the gracious financial package. After visiting campus multiple times and getting to know the Saint Mary’s community, she realized the College was a perfect fit for her.

Genesis has taken advantage of the many opportunities the College has to offer and has become incredibly involved. She reinstated the Straight and Gay Alliance and currently serves as club president. She is also co-president for Feminists United, secretary for two other clubs, and is involved with even more clubs on both Saint Mary’s and Notre Dame’s campuses, all on top of being a resident assistant in McCandless Hall.

Reflecting on her packed schedule, Genesis said, “I like being busy and having a lot of stuff to do. For me, it keeps me more in-tune with my schedule.”

More benefits arise from keeping a busy schedule in college than for the sake of the busy schedule, though. For Genesis’ future aspirations, which includes graduate school, being involved with so much will give her an advantage when applying to grad schools and better prepare her for her future packed schedules, her career, and life in general.

Genesis’s experiences at Saint Mary’s have also taken her beyond campus. Through the College, Genesis has gone on a pilgrimage to Peru and spent a couple weeks of one summer studying abroad in Greece. Her interest in global studies stemmed from her desire to travel to other countries and by studying it, she hopes to learn how to best assist underdeveloped countries.

While Genesis always knew that she wanted an education in global studies, she was introduced to the gender and women’s studies major through her travel interests and campus involvement, specifically with Saint Mary’s SUSI program. The major has paired exquisitely with her global and personal interests. With sureity she shares, “My gender and women’s studies major has helped me, being a Latina, to be more confident in the various identities I have, and in understanding better the identities I don’t have that are underrepresented for other people.”

A Future With Many Paths

Genesis is very aware of the many different directions her studies could take her. She has intentions of continuing her studies at the graduate level, and is considering several different programs but she is interested in joining the Peace Corps first. She hopes that these steps will lead her abroad to work in foreign affairs at the United Nations or the US Department of State, but is open to the many other opportunities presenting themselves in her future.