“I WANT TO UNDERSTAND THE HUMAN SIDE OF ECOLOGY TO MAKE SUSTAINABLE CHANGE.”

“I WANT TO UNDERSTAND THE HUMAN SIDE OF ECOLOGY TO MAKE SUSTAINABLE CHANGE.” 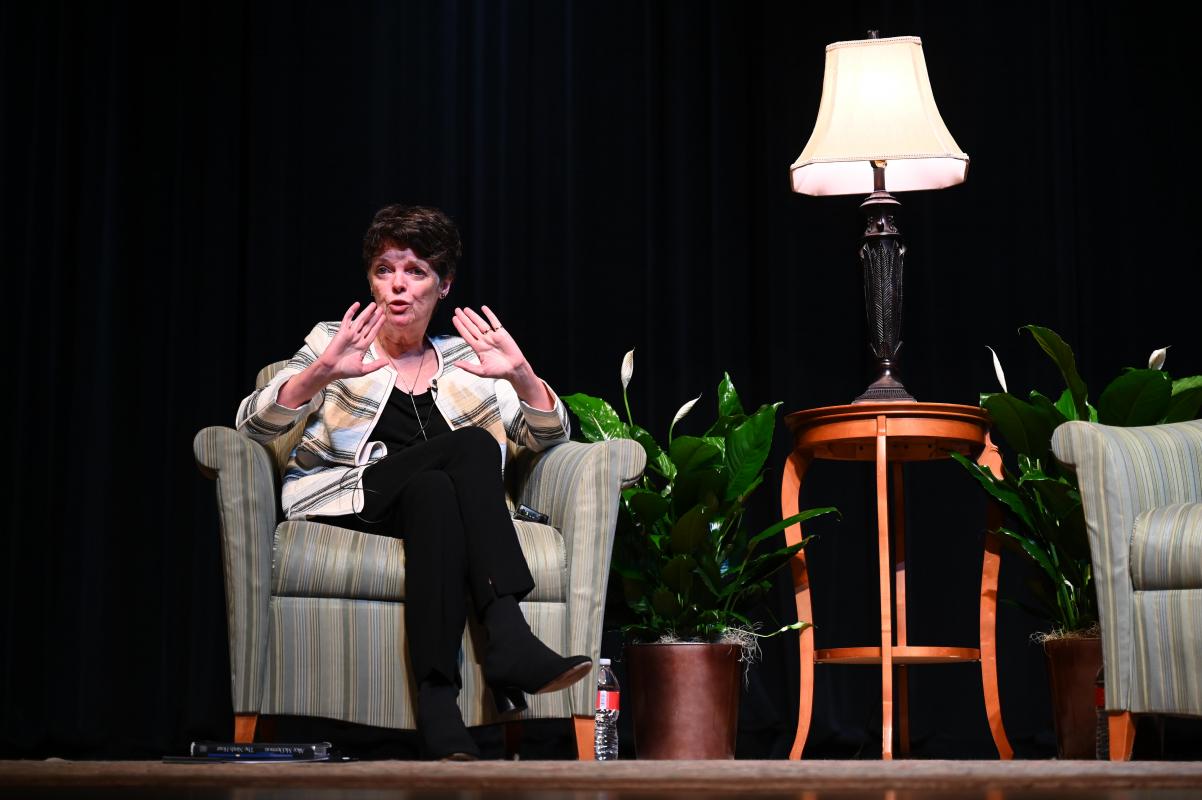 The author has had a lot of experience working and conversing with people. Currently, a professor at Johns Hopkins University, McDermott has written eight best selling novels, one of which, Charming Billy, won both the American Book Award and the National Book Award.

McDermott said she draws her characters, plots, and literary worlds from her real-life experiences. In fact, McDermott said, we are all influenced by our unique experiences in the world -- no two of us would ever craft a sentence in the exact same way.

Before the Christian Culture Lecture, McDermott had the opportunity to meet with students, both from Saint Mary’s and area high schools, to discuss her writing process with them and answer any of their questions. During this writing workshop, she compared writing to the pursuit of experience, elucidating that we all hope to gain experience through the process of writing.

“What’s driving you to get these words on the page?” She asked the students during the workshop. Many students in the crowd responded with their need to tell their story and to relay a story to an eager audience. McDermott affirmed this desire to craft and share a story.

“Storytelling is an ongoing tradition,” she said, “and we are all influenced by those before us.”

McDermott is a master when it comes to storytelling. Her most recent novel, The Ninth Hour, tells a story that is a twist on substitutes. McDermott wondered what would become of a woman and her unborn child after her husband commits suicide: who would serve as substitute for the lost father and husband? She found her answer in the real-life experiences of the Catholic Sisters who visited her mother just after the birth of McDermott. In this real-life experience, McDermott found a story of unheroic selflessness.

“My task was to discover who these women were, not as stereotypes or clichés, but as the type of singular, unique individuals that fiction demands each character to be.”

Since she first started writing, McDermott said she’s grown more forgiving, but also more impatient. In regards to Christianity itself, McDermott claims that this is also true.

“Hope has given way to impatience,” she said of Christianity and the Catholic Church, “to leave the Church behind or endure it as it is, strikes me as a failure of imagination.”

During her lecture, McDermott recalled her and others’ experiences with Catholicism in order to discuss how religion plays a greater role in our lives.

“Religious tradition gives us a way to begin to think about the world.”

McDermott also took time to comment on the beliefs of many Christians that “pain and suffering is transformative.” This becomes beautifully reflective of the wise words of Saint Mary’s third president, Sister M. Madeleva Wolff, CSC, who, while promising students discovery, realized she could not promise them everything, including security.

“We will not wish you security,” Madeleva wrote, “For we remember that ‘security is mortal’s chiefest enemy.’ And, we know that you can only be secure when you can stand everything that can happen to you. If your school has prepared you for this, it has been a good school.”

Although Saint Mary’s is a place relatively free of pain and suffering, it is a college where students are placed out of their comfort zones so that they may culminate necessary, unique experiences and embrace perspectives from those who are different from themselves.

All of this talk of experience culminated in McDermott’s most passionate appraisal of reading. McDermott firmly believes that to be an avid writer one must also be an avid reader, and she shared this belief with the students during the writing workshop. She described reading as an intimate look into the mind of both the author and oneself.

“Accept your influences,” she said, “Reading is the equivalent to experience. It shapes you and it shapes the way you see the world.”