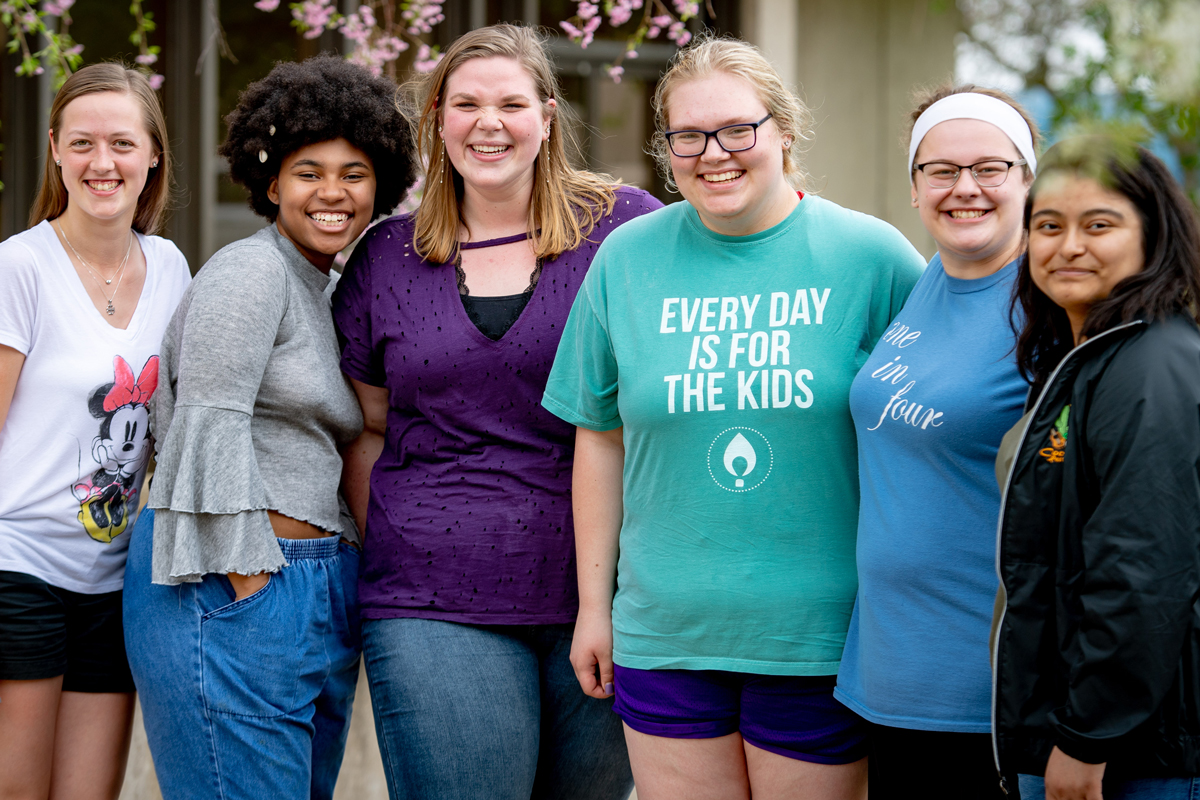 In 2018, Saint Mary’s College created a statement in which we declared our commitment to fight for justice for all marginalized, victimized populations, and we pledged actively to disrupt the dehumanizing effects caused by systemic and individual racism. You can read the full statement on our main department page. As a College, we challenge ourselves and you to commit to engage in continuous learning to understand the challenges of communities impacted by racial injustice. The following resources are available to develop awareness and overcome bias.

The Morning After: Dealing with the Traumatic Effects of Being Black in America by Redgina Hill, PhD

White Privilege: Unpacking the Invisible Knapsack by Peggy McIntosh
(A 1989 essay by an American feminist scholar that covers 50 examples, or hidden benefits, of the privilege White people experience in everyday life)

The Massacre of Black Wall Street
(Describes the 1921 Tulsa race massacre when mobs of White residents, many of them deputized and given weapons by city officials, attacked Black residents and businesses of the Greenwood District in Tulsa, Oklahoma)

Freedom is a Constant Struggle by Angela Davis
(Reflecting on the importance of Black feminism, intersectionality, and prison abolitionism for today's struggles, Davis discusses the legacies of previous liberation struggles, from the Black Freedom Movement to the South African anti-Apartheid movement)

The Making of Asian America: A History by Erika Lee
(Tells the little-known history of Asian-Americans and their role in American life, from the arrival of the first Asians in the Americas to the present-day)

The Other Slavery: The Uncovered Story of Indian Enslavement in America by Andrés Reséndez
(The sweeping story of the enslavement of tens of thousands of Indigenous People  across America, from the time of the conquistadors up to the early 20th century)

Me and White Supremacy: Combat Racism, Change the World, and Become a Good Ancestor by Layla Saad
(Leads readers through a journey of understanding their White privilege and participation in white supremacy, so that they can stop (often unconsciously) inflicting damage on Black, indigenous, and people of color, and in turn help other White people do better, too)

The New Jim Crow by Michelle Alexander
(Posits that the U.S. criminal justice system uses the War on Drugs as a primary tool for enforcing traditional, as well as new, modes of discrimination and oppression)

Writing Beyond Race by bell hooks
(Models the constructive ways scholars, activists, and readers can challenge and change systems of domination)

White Privilege: Essential Readings on the Other Side of Racism by Paula Rothenberg
(A collection of 16 essays and articles that seeks to make Whiteness visible, to analyze the nature of White privilege, and to offer suggestions for using that privilege to combat racism)

White Fragility: Why It's So Hard for White People to Talk About Racism by Robin DiAngelo
(Explores the counterproductive reactions White people have when their assumptions about race are challenged, and how these reactions maintain racial inequality)

Race Matters by Cornel West
(Addresses a range of issues, from the crisis in Black leadership and the myths surrounding Black sexuality to affirmative action, the new Black conservatism, and the strained relations between Jews and African-Americans)

The Sovereignty of Quiet: Beyond Resistance in Black Culture by Kevin Quashie
(Explores quiet as a different kind of expressiveness, one which characterizes a person’s desires, ambitions, hungers, vulnerabilities, and fears)

Critical Race Theory by Richard Delgado and Jean Stefancic
(A compact introduction to the field that explains, in straightforward language, the origins, principal themes, leading voices, and new directions of this important movement in legal thought)

How to be an Antiracist by Ibram X Kendi
(Urges readers to break out of the false framework of “racist” and “not racist,” instead laying out what it means to be antiracist: viewing racial groups as equals and pushing for policies that create racial equity)

White Jesus: The Architecture of Racism in Religion and Education by Alexander Jun, Tabitha Jones- Jolivet, Allison Ash, and Christopher S. Collins
(Deals with the religion of Whiteness and its discontents and seeks to correct the many harms and long-standing traumas that Whiteness as religion has inflicted upon non-White peoples all over the world)

Eloquent Rage: A Black Feminist Discovers Her Superpower by Dr. Brittney Cooper
(An indictment of neoliberal society and its myths of exceptionalism, but also a “homegirl hem-up” for those struggling to correct both systemic oppression and personal flaws)

The Souls of Black Folks by W.E.B. Du Bois
(Showing the reader “the strange meaning of being Black here in the dawning of the Twentieth Century,” the author explains the meaning of the emancipation, and its effect, and his views on the role of the leaders of his race)

Intersectionality by Patricia Hill Collins and Sirma Bilge
(Presents the topic of Intersectionality, which is the interconnectedness of race, class, and gender as it applies to individuals and groups)

Pedagogy of the Oppressed by Paulo Freire
(Proposes a pedagogy with a new relationship between teacher, student, and society; based on the author’s own experience helping Brazilian adults to read and write)

Teaching to Transgress by bell hooks
(Education as the practice of freedom involves teaching students to "transgress" against racial, sexual, and class boundaries in order to achieve the gift of freedom)

For White Folks Who Teach in the Hood by Christopher Emdin
(The author shares his experience of learning and teaching in an urban setting and offers up a new approach to education; dismantles stereotypes and advocates for a student-centered approach, even in “at-risk” classrooms)

The Hate U Give by Angie Thomas
(A 2017 young adult novel, expanded from a short story the author wrote in college in reaction to the police shooting of Oscar Grant in Oakland, California)

Just Mercy by Bryan Stevenson
(A memoir, aggregates and personalizes the struggle against injustice in the story of one activist lawyer)

The Sun Does Shine: How I Found Life and Freedom on Death Row by Anthony Ray Hinton and Lara Love Hardin
(A troubling, moving, and ultimately exalting journey through the decades the author lived under the threat of death while an unjust system that refused to acknowledge mistakes failed him repeatedly)

Stolen Justice: The Struggle for African American Voting Rights by Lawrence Goldstone
(Traces the injustices of the post-Reconstruction era through the eyes of incredible individuals, both heroic and barbaric, and examines the legal cases that made the Supreme Court a partner of White supremacists in the rise of Jim Crow)

This Book Is Anti-Racist: 20 Lessons on how to Wake Up, Take Action, and Do the Work by Tiffany Jewell
(Skillfully breaks down anti-racism into 20 preliminary starting lessons, each with an activity)

So You Want to Talk About Race by Ijeoma Oluo
(Guides readers of all races through subjects ranging from intersectionality and affirmative action to "model minorities" in an attempt to make the seemingly impossible possible: honest conversations about race and racism, and how they infect almost every aspect of American life)

Black Power Mixtape: 1967-1975 — Available to rent
(Mobilizes a treasure trove of 16mm material shot by Swedish journalists who came to the US drawn by stories of urban unrest and revolution; with access to many of the leaders of the Black Power Movement, the filmmakers captured them in intimate moments and remarkably unguarded interviews)

Fruitvale Station (Ryan Coogler) — Available to rent
(Based on the events leading to the death of Oscar Grant, a young man who was killed in 2009 by BART police officer Johannes Mehserle at the Fruitvale district station of the Bay Area Rapid Transit system in Oakland, California)

I Am Not Your Negro (James Baldwin doc) — Available to rent or on Kanopy
(A brilliant, absorbing, and stirring vision of James Baldwin as a public civil rights advocate and crucial spokesperson for African-Americans in a revolutionary time; based on Baldwin's unfinished book Remember This House)

If Beale Street Could Talk (Barry Jenkins) — Hulu
(After her fiance is falsely imprisoned, a pregnant African-American woman sets out to clear his name and prove his innocence)

King In The Wilderness  — HBO
(Chronicles the final chapters of Dr. Martin Luther King Jr.’s life, revealing a conflicted leader who faced an onslaught of criticism from both sides of the political spectrum)

See You Yesterday (Stefon Bristol) — Netflix
(An Afrofuturistic tale led by a social justice narrative, follows two men who build makeshift time machines to save one man’s brother from being wrongfully killed by a police officer)

Selma (Ava DuVernay) — Available to rent
(Tells the story of how the revered leader and visionary Dr. Martin Luther King Jr. and his brothers and sisters in the movement prompted change that forever altered history)

The Black Panthers: Vanguard of the Revolution — Available to rent
(The first feature-length documentary to explore the Black Panther Party, its significance to the broader American community, its cultural and political awakening for Black people, and the painful lessons wrought when a movement derails)

The Hate U Give (George Tillman Jr.) — Hulu with Cinemax
(Based on the book of the same name, a vivid dive into the human cost of police shootings)

Code Switch (NPR)
(A weekly podcast whose name refers to the linguistic phenomenon of code-switching, when a speaker moves between multiple languages or dialectics)

Momentum: A Race Forward Podcast
(Features movement voices, stories, and strategies for racial justice, with unique takes on race and pop culture, and uplifting narratives of hope, struggle, and joy)

Seeing White
(Explores what it means to be White in America)

Talking Race With Young Children (NPR Podcast)
(How to handle conversations about race, racism, diversity, and inclusion, even with very young children)

Enfleshing Freedom: Body, Race and Being by Copeland, M. Shawn
(A Catholic perspective against racism, colonialism, and other forms of oppression that can manifest within religion)

A Social Statement: Freed in Christ: Race, Ethnicity and Culture by Evangelical Lutheran Church of America
(Expresses the ELCA’s calling to celebrate culture and ethnicity, which commits the ELCA to confront racism, to engage in public leadership, witness, and deliberation on these matters, and to advocate for justice and fairness for all people)

Mennonite Church USA Statement on Racial Justice (and other resources) by Mennonite Church USA
(A statement on racial injustice in response to events surrounding the killing of George Floyd in Minneapolis, Minnesota; calls for Mennonite congregations “to stand in solidarity with communities of color, walk alongside them, and, indeed, be led by them”)

Recommit to Racial Justice Guide by Network: Advocates for Social Justice, Inspired by Sisters
(Invites everyone to join in a dive into the challenging truth of racism in society and the continuing saga of White privilege)

Open Wide Our Hearts: The Enduring Call to Love. A Pastoral Letter Against Racism by United States Conference of Catholic Bishops
(Invites Americans to open wide their hearts in order to end racism and heal its effects)