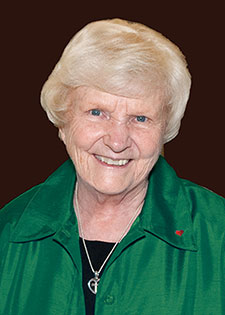 March 16, 2015 (Notre Dame, Ind.)—Saint Mary’s College is proud to announce details of its 168th Commencement, which will take place at noon on Saturday, May 16 on Le Mans Green in front of the iconic Le Mans Hall. There are about 350 members of the Class of 2015, representing 30 states, one U.S. territory (Puerto Rico) and five countries other than the U.S. (Canada, China, Mexico, Rwanda, and Singapore.) The valedictorian is Sarah Miller '15.

The 2015 Commencement speaker is Sister Rosemary Connelly, RSM, executive director of Misericordia Home in Chicago, which provides programs, services, and residential care to more than 600 children and adults with developmental and physical disabilities. The College will recognize Sister Rosemary with an honorary doctorate of humanities for her 46 years of leadership, which has been integral to Misericordia growing into a loving, challenging, and dignified environment to its residents.

Also receiving an honorary degree at Commencement is Terri Kosik, executive director of the Early Childhood Development Center at Saint Mary’s College and the University of Notre Dame. The ECDC program serves children, ages two through kindergarten during the school year and school age children through age 10 during the summer day camp program. During her 40 years with the ECDC, Kosik has dedicated her work focusing on the importance of quality programs for young children, their families, and teachers both locally and throughout the state. 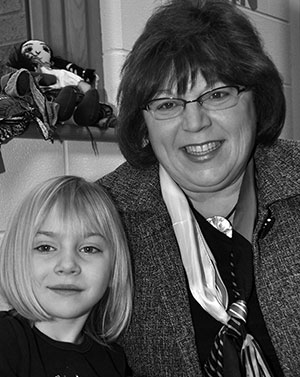 Terri Kosik, executive director of the Early Childhood
Development Center at Saint Mary's College and
the University of Notre Dame. She will receive an
honorary degree from the College at Commencement.
Here she poses with her granddaighter, an ECDC
alumna.Saint Mary’s College President Carol Ann Mooney noted that each woman has devoted more than 40 years to their ministries, offering education, programming, and services to children and/or adults. “At Saint Mary’s we challenge our students to promote human dignity throughout their lives. We are delighted to honor these exceptional women for dedicating their lives to some of our most vulnerable citizens,” Mooney said.

Sister Rosemary, a member of the Religious Sisters of Mercy, was appointed administrator of Misericordia in 1969. The organization is dedicated to the principle that each person should be encouraged to achieve his or her maximum potential, realized through educational, vocational, spiritual and recreational programs. Sister has received numerous awards and honors throughout the years, including seven honorary doctorate degrees, from the University of Notre Dame, Loyola, DePaul, Lewis, St. Xavier, Marquette and Dominican Universities. Click for more information on Misericordia.

Meanwhile, in addition to leading ECDC, Kosik has taught early childhood courses at both Saint Mary’s College and Indiana University-South Bend, preparing new generations of graduates to teach little ones. Under Kosik’s leadership, ECDC provides opportunities for undergraduate students from Saint Mary’s, Notre Dame, and other area colleges and universities to participate in the ECDC classrooms as practicum students. Click for more information on ECDC.