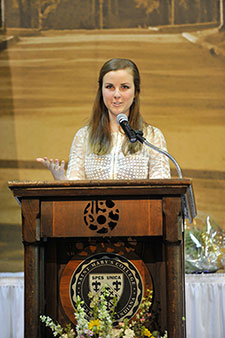 Kaitlyn Rabach '15, the Outstanding
Senior of the Class of 2015, addresses
her classmates at the Alumnae-Senior
Champagne Brunch. May 11, 2015 (Notre Dame, Ind.)—The Saint Mary’s College Alumnae Association is proud to announce the recipient of this year’s Outstanding Senior Award is Kaitlyn Rabach ’15, a political science major with minors in gender and women’s studies and global studies.

The award recognizes a member of the senior class who exemplifies the spirit and values of the College. Tradition dictates that the recipient be someone who carries out the beliefs of her faith in daily living and is distinguished by scholarship, leadership, and outstanding dedication to Saint Mary’s—as demonstrated through participation in both curricular and extracurricular activities.

Three seniors are honored each year as exceptional representatives of their graduating class. As the Valedictorian reflects the mind, and the Lumen Christi Award recipient represents the soul, the Outstanding Senior embodies the heart of the class. Rabach, of Muskegon, Mich., was honored at today’s Alumnae-Senior Champagne Brunch as part of Senior Week festivities leading up to Commencement, Saturday, May 16.

She offered this thought in her remarks to the Class of 2015: “Because of our all-women’s, faith-based education, we have developed the tools to be confident leaders. We learned to be strong in the classroom, and now we’re ready for wherever our career takes us in years to come. During our time here, no matter if we spent our energy pursuing the sciences or the humanities, we saw women doing great things. We did great things.” 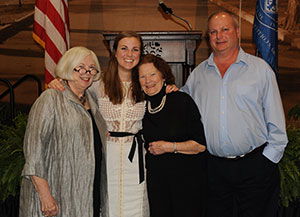 “Kaitlyn embodies the Mission of Saint Mary’s College: She is prepared to make a difference in the world, she is intellectually curious, and she has shown great leadership, civic responsibility, and compassion,” Wright noted in her nomination letter. 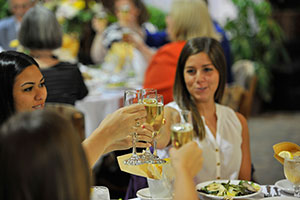 Members of the Class of 2015 toast each other at
the Alumnae-Senior Champagne Brunch.In her speech, Rabach added that among all her experiences at Saint Mary’s, the displays of love and compassion were the most moving. “I experienced the true meaning of our sisterhood and Saint Mary’s family after the recent passing of my mother. Never before have I felt so much love and kindness from the hearts of my classmates, alumnae, my professors and staff alike. I had always known Saint Mary’s is a unique place, but especially in times of difficulty the undeniable support of this community fosters strength among us.”