The Dog Days of Summer

The Dog Days of Summer 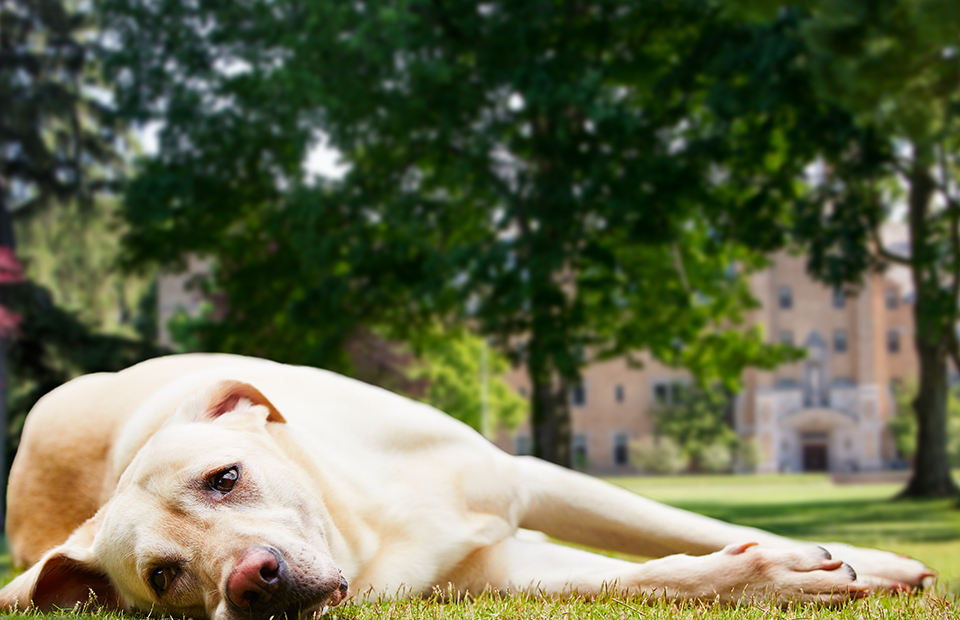 As the calendar turns to August and the temperatures seem to hit their highest notch, I always think we’ve reached the “dog days of summer.” But in this year’s unseasonably cool August start, I decided to find out where that phrase comes from. I had always imagined it to be a modern expression—referring simply to the sultriest summer days, when even the most watchful and energetic dogs (and people!) wallow in dreamy indolence.

Indeed, that’s one usage, but the origin of the phrase is historically rich. The ancient Egyptians associated Sirius, the brightest star in the night sky, with the sun and with scorching seasonal heat. The Greeks and Romans knew Sirius as the “dog star”—part of the constellation Canis Majoris, the “Big Dog” who accompanies Orion the Hunter across the heavens. A fixture of the winter sky in the northern hemisphere, Sirius also appears low on the eastern horizon near dawn in late summer, appearing to rise with the sun. Stories of heat-induced torpor, lunacy, and natural disasters are associated with Sirius across many centuries. One early 19th-century English writer, John Brady, captures some of the enduring “dog days” mythology in his 1813 Clavis Calendaria, Or A Compendious Analysis of the Calendar: Illustrated with Ecclesiastical, Historical, and Classical Anecdotes. He notes the lore that on the first day Sirius appears with the sun, “the Sea boiled, the Wine turned sour, Dogs grew mad, Quinto raged with anger, and all other creatures became languid; causing to man, among other diseases, burning fevers, hysterics, and phrensies."

Well, life at Saint Mary’s is hardly indolent or idle, nor is it feverish and frenzied, in these “dog days.” But I think we all enjoy the change of pace that characterizes the summer months. The brief period just after Commencement is followed by all the activities of Reunion, which this year was again a virtual event. And then there is the briefest lull before the campus begins to hum with different kinds of activity. For example, we held two “sneak previews” in June for members of the Class of 2025 who wanted a chance to visit campus and begin planning for the fall semester. One hundred thirty seven first-year students attended the previews with members of their families, and they had presentations from key offices, tours of campus, and a picnic lunch on the Island—followed by an outdoor “open house” to learn more about student services.

Late June and early July saw the arrival of the United States Olympic Women’s Wrestling team, as well as members of the US National Team, the U23 national wrestling team, coaches, trainers, and fans. Saint Mary’s was proud to host this high-profile event and to play a role in the preparation of these women athletes for Olympic competition. In mid-July, we hosted the annual Embody program—a theology institute for high school girls that explores beauty, justice, and faith in action. Sixteen high school students enjoyed theological readings and discussion, time for reflection on God’s love for them, and a commitment to action that transforms our world.

American Pilgrims on the Camino arrived on campus later last month, bringing together 130 members of the organization from 26 states for an annual gathering in lieu of travel to Spain for the Feast of Saint James. We also welcomed musical composers to campus for an intensive overnight camp. While we postponed many of our overnight camps, the summer rounded out with the happy rotation of many day camps—from cheer camp to art camp, from sports to dance to theater.

Although these were big events for visitors, we have also enjoyed seeing—throughout the summer—our own students on campus. Both undergraduate and graduate students undertook coursework, and we have had our own researchers on campus, both faculty members and students conducting independent work under their mentorship. Thirty-two students, supported by endowed funds and faculty grant funding, worked in laboratories and libraries, honing their analytic and creative skills in a variety of fields.

So, while the pace is slower and the population is lower, Saint Mary’s remains a vital and active place throughout the “dog days of summer.” I hope we can ward off the floods and pestilence associated with the rise of Sirius in the ancient traditions—after all, we’ve had quite enough stress and distress over the last year and a half. I, for one, am counting my lucky summer stars, and as we turn the calendar page to fall and a new academic year, I plan to hold onto some of the season’s warmth and sweetness as “winter fodder” for the shorter days ahead.

I look forward to keeping in touch with you in the upcoming months.