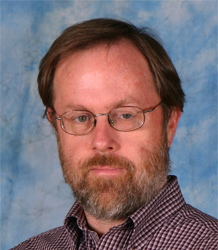 Marc Belanger is an expert on the politics of Latin America, democratization, and political identity. He’s one of the founding members of Saint Mary’s Intercultural Studies program. In 2001, he won the Maria Pieta Award for outstanding teaching. The political science professor, who earned his PhD in comparative politics at the University of Massachusetts, is knowledgeable—no doubt about that. But what’s most important to this seasoned political science professor is the way he passes that knowledge on to his students.

Belanger teaches comparative politics, among other subjects, and enjoys introducing his students to the politics of places they initially know little about. "The United States does not always take the time to understand how other nations and cultures work and it is very satisfying when students learn about and become genuinely interested in the politics of countries such Iran, Nigeria, India, or Brazil. It's not my job to judge these places poltiically, it is to help students understand them better and be able to draw their own conclusion," says Belanger.

His interest in in introducing students to the realities of Latin America led Belanger to work with Saint Mary's Center for Women's Intercultural Leadership and the Heifer Project to develop a service learning study trip in Honduras. Belanger says, “Students get a first-hand glimpse at some of the realities of poverty and underdevelopment and the efforts people are making to create a better life. The people they meet become human beings and not just objects of pity.” He is especially pleased to have worked with a former student, Catherine Grieble Bowman '99, his co-leader since 2006. "She is a wonderful colleague and amazing role model for students."

The summer study trip includes time at Hogar Diamante, a boys home in the city of Amarateca, where students help with painting and repairs around the home and spend time getting to know the residents.

Students also travel to several Heifer Project sites in Honduras to participate in service projects and to learn about the organization’s mission to end world hunger. The last three days of the trip are devoted to a visit in Coban, exploring Mayan ruins, and learning about the realities of contemporary Mayan communities.

Through their engagement in local projects and conversations with the Honduran people, the Saint Mary’s groups study issues of poverty, development, gender issues, trade, and sustainable development.

The program has expanded to an additional spring break trip to Honduras and Belanger couldn’t be happier with the options he can offer his students. Not only are they exposed to the real-life application of their textbook theories, they are learning valuable skills that prepare them for a future career and for life.

"Studying politics has taught me that while conflict is persistent, so is the human ability of finding solutions to problems. I don't want students to despair about the future and I hope I am giving them a few tools to help them find solutions," Belanger says. Whatever his students end up doing, Belanger wants them to be able to both understand but not be intimidated by complexity.

“I want them to learn critical thinking and writing and to express complicated ideas clearly,” he says. “The environment at Saint Mary’s encourages students to see what they’re capable of and to learn to trust themselves. All my courses are a means to that end.”

She’ll climb on a chair. She’ll have students stand up, sit down, form a line. She’ll lie on the floor and feign a siesta until some brave soul answers a question. Associate professor of Spanish Jennifer Zachman wants the language to come alive for her students, and she’ll do just about anything to get them talking.

Call her half-crazy (or media loca) but there is method to Zachman’s madness. “I try to get my students to speak Spanish and participate actively,” she says. “I try to keep a lot of movement in the class not only in terms of what we’re covering, but sometimes, when it’s relevant, physical movement.”

She says she’s trying to show that “studying a language isn’t just studying grammar and vocabulary but also idiomatic expressions related to the culture ... The goal in a language class is always communication. So I tell my students that I prefer them to speak as much as possible, even if they make errors.”

Zachman grew up speaking English in a small town in Minnesota, but you’d never guess it when she launches into her second language. Her accent, gestures, and word choices make her seem more like a character from a Pedro Almodóvar film than a Garrison Keillor monologue.

The author of a forthcoming, award-winning book on Spanish women playwrights, Zachman teaches courses on contemporary theatre, women writers, and cinema in the Spanish-speaking world. She travels frequently to Spain for research and as the coordinator of Saint Mary’s program in Seville , she urges students to do the same. “I really try to encourage them to study abroad,” she says, “particularly since you can meet people who are going to have a lasting impact on your life, much like the friends you’ll meet here on campus.”

At Saint Mary’s, a small liberal arts college, seasoned professors like Zachman teach every foreign language class from introductory to advanced levels. That interaction is a plus, she says: “I get to know my students really well. I’ve had innumerable occasions where I’ve learned something from my students about a text, because they saw something I didn’t see. That’s what I think is really rewarding … There’s always more that you can discover.”