Responding to the Needs for 175 Years

In our 175th year, we reflect on what makes us strong, what makes us a leader in Catholic women’s education, and makes us Saint Mary’s. These points of inquiry do not lead to one single answer, but they do point back to the Sisters of the Holy Cross. These courageous women have pursued ministries that serve all people and honor every individual’s God-given dignity.

Pioneering women’s education hasn’t always been easy, but with a deep sense of faith, the sisters have set examples that guide our institution today.

Like when Father Sorin’s request to establish a religious community of women, the Sisters of the Holy Cross, was denied because there was already a congregation established in southern Indiana. Instead of disbanding or moving south, the sisters moved across the stateline to Bertrand, Michigan where there was a need for education, care of orphans, and visiting the sick. 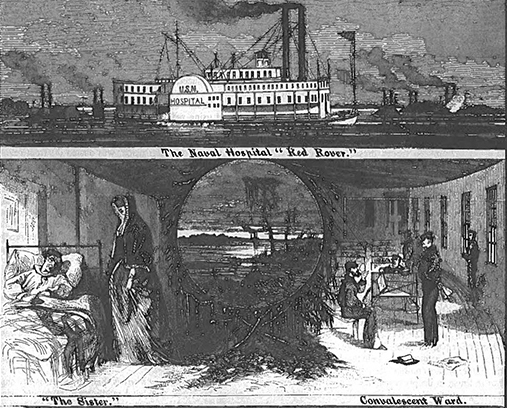 Like when the Sisters responded to a request by US Civil War Governor Morton of Indiana to care for the Indiana soldiers in 1861. Although they had no training as nurses, six Holy Cross sisters, led by Mother Angela, to tend the sick and the wounded. On Christmas Eve 1862, three Sisters of the Holy Cross boarded the US Navy’s first hospital ship, The Red Rover, to serve as nurses for the wounded on both sides of the war. In so doing they became the pioneers of the United States Navy Nurse Corps. Before the conflict ended, 65 of the 160 Sisters of the Holy Cross in the United States would serve in the Civil War, and another 13 sisters would serve in the Spanish-American War.

Six years prior in 1855, moving back to Indiana, the sisters expanded their work to higher education for women and laid the foundation for the Saint Mary’s we know today. It is from them that we have established our core values of learning, community, faith, spirituality, and justice. The College continues to grow and prosper, and in the next year we will continue to reflect, sharing stories and portraits of the last 175 years.