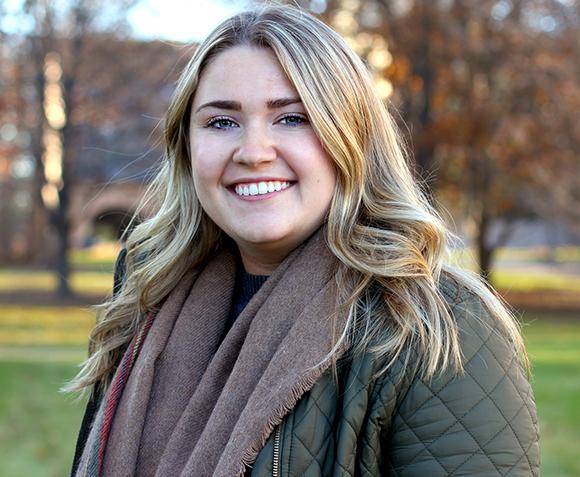 Raising Children to be Citizens of the World

Globetrotting, social media savvy, blog writing mom of three, credits Saint Mary’s for her desire to raise her children as “citizens of the world”

Elizabeth Diehl Newcamp ’04 and her husband, Jeff (ND ’04), spent a recent weekend toting their three “littles” around a metropolitan city — visiting museums, historic sights, playgrounds and restaurants. Not an unusual activity for a family of five except that the Newcamps were in Tallinn, the capital of Estonia.

Estonia, as the crow flies, is about a thousand miles from their home…in Delft, Netherlands.

And the Netherlands, no matter who is flying, is about 5,000 miles and worlds away from their previous domicile in Colorado.

This 2004 Saint Mary’s graduate moved to the Netherlands a few years back when her husband was given the opportunity to pursue his PhD at one of the world’s premiere universities for aerospace engineering.

It wasn’t a hard choice, Newcamp said. “Jeff and I knew that moving abroad with little ones would be a challenge, but to give them the opportunity to experience a different culture was something we could not pass up.”

Newcamp’s global wanderlust was sparked when she journeyed to Ghana after graduation with Katie Harrison ’04, and the Sisters of the Holy Cross.

“That was the first time I really immersed myself in a culture,” she said. “Katie and I lived with the sisters and taught at the local school. We dove head first into life there.”

A law degree, marriage, and two children followed that adventure, then came the offer for the Netherlands. As they prepared for the big move, Newcamp started a blog called Dutch, Dutch, Goose to help family and friends keep up to date with their activities. But it soon morphed into something larger, and now the blog has quite a following among parents who travel abroad with children.

Her own children, all boys, are Henry, 5 (already fluent in Dutch), Oliver, 2, and Teddy, 6 months, who was born in Delft. Rather than using their names, in her blog she amusingly calls them the “big little, the middle little, and the little little.” But they are each becoming “big” in their views of the world.

“We hope our children learn to be citizens of the world, as we would say at Saint Mary’s,” Newcamp said. “We hope they have a sense of wonderment for the vastness of the planet. We want them to see there are many ways to do things, all of them valid and all with varying pros and cons.”

In the past two years, the Newcamps have zigzagged across Europe with their children, as well as trekking to Morocco (Africa) and Finland (north of the Arctic Circle)

Wherever they roam, the family always seeks out playgrounds to help the boys burn off energy. Any language barrier the youngsters may encounter has never dissuaded them from making friends.

“The language of play is universal,” Newcamp said. “And no matter where we’ve been, you find kids having meltdowns, moms kissing ‘owies,’ and families at play.”

It is her and Jeff’s hope that the boys develop an appreciation for how small the world is, how everyone is dealing with the same issues, and how small acts of kindness can make a big difference in every corner of the world.

For herself, “I hope that meeting so many people and experiencing different cultures is making me a more tolerant and loving individual. I’m certainly less judgmental, but also more curious about so many things that before I lived abroad I didn’t even know existed.”

Newcamp said she views herself as a citizen of the world, feeling responsibility for others on the planet.

“I also find the global perspective means bringing history to life and understanding where we've been,” she said. “To stand on the beaches of Normandy or under a Roman aqueduct forces you to understand that you are just one small piece of the puzzle. You look around and realize everyone on the planet is on this journey with you. Your small actions affect them.”